Hexameter is a metrical line of verse. It is usually made of six parts, called feet. It is the standard verse form used in Ancient Greek and Latin literature. The Iliad and Aeneid use it, and so do Ovid's Metamorphoses. English poetry rarely uses hexameter. 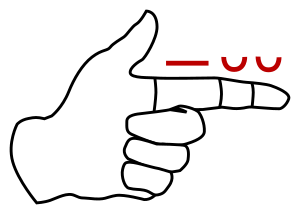 A dactyl is like a finger, having one long syllable followed by two short syllables.

The meter consists of lines made from six ("hex") feet. In strict dactylic hexameter, each of these feet would be a dactyl, but classical meter allows for the substitution of a spondee (two long syllables) in place of a dactyl in most positions. Specifically, the first four feet can either be dactyls or spondees more or less freely. The fifth foot is frequently a dactyl (around 95% of the time in Homer).

Because of the strong pause at the end of the line, it is traditionally regarded as a spondee. Thus the dactylic line most normally looks as follows:

(note that — is a long syllable, u a short syllable and U either one long or two shorts and X anceps syllable)

As in all classical verse forms, the last syllable can actually be short or long.

All content from Kiddle encyclopedia articles (including the article images and facts) can be freely used under Attribution-ShareAlike license, unless stated otherwise. Cite this article:
Hexameter Facts for Kids. Kiddle Encyclopedia.