The Canterbury Tales facts for kids 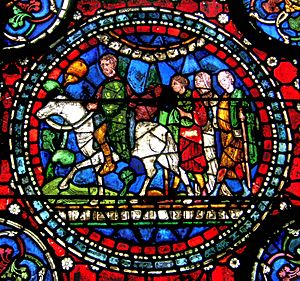 The Canterbury Tales is a book of stories written by Geoffrey Chaucer. It was written in the 14th century. It was one of the first books to be written in the English language. The book is about a group of pilgrims traveling from London to Canterbury. As they travel along, each person tells a story to pass the time. Chaucer planned to write 120 stories, with each person telling two stories on the way there and two of the way back. However, only 23 were completed, and one was partially finished. Two of the stories are written in prose. The others are written in verse. They were so popular that he was invited to read his stories to the king and royal court. 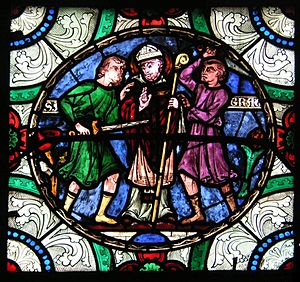 The murder of Thomas Becket

The Canterbury Tales is about a group of people who are pilgrims. They are travelling to an important sacred site. In the Middle Ages, many Christian people went on pilgrimages to Jerusalem, Rome, Santiago de Compostela and Canterbury. Canterbury Cathedral was a famous pilgrimage site because it contained the shrine (a place for remembering) of Saint Thomas Becket.

Thomas Becket had been the Archbishop of Canterbury in the 1100s. He had an argument with his old friend, King Henry II, and in 1170 he was murdered by some of the King's knights on order from the King. The King felt very sad and guilty. He had a magnificent tomb built for his old friend.

People began to visit the tomb. Soon, some people said that Thomas Becket was a saint, and that his bones could work miracles. He is regarded as a martyr for the Christian faith and as a saint by both the Roman Catholic and Anglican churches. In the late Middle Ages his shrine made Canterbury one of the four most important pilgrimage places in Europe.

Many pilgrims used to meet together in London. The Canterbury Tales tells of the meeting of a group at an inn in Southwark, which was a village south of the Thames River and now making up part of London. This was a good place to meet because people from the north could cross the Thames River by London Bridge.

Canterbury is in the south-east of England. Pilgrims used to gather in groups because it was dangerous to travel alone. In the days before modern banking, every traveller had to carry a lot of money to pay for food and accommodation (a place to sleep). Robbers often attacked people along the roads.

When pilgrims gathered in a group, the group could be made up of many different kinds of people, both rich and poor, noble and humble. The groups often contained a number of religious people such as priests, monks and nuns. In Chaucer's story, the most noble person is a knight.

The Canterbury Tales begins with a Prologue (which means "a few words to begin"). In the prologue Chaucer describes the time of year, which is April, when the weather begins to get warmer after winter. He says that it is at this time that people begin to go on pilgrimage. Chaucer tells the reader about the people who are gathered at the inn. He describes the people so clearly that many of them have become famous characters in English Literature, and have often been shown in paintings. Chaucer describes how each person tells a story to entertain the other as they travel along.

Some of the tales (stories) are serious and others are funny. Some of the funny stories are vulgar (rude). A lot of the tales talk about the Christian faith. Sometimes the theme (main idea) of one story is followed into the next story, as a new story-teller responds (or answers) to a story they have just heard. All of the tales are about the way that people think and behave towards each other.

About The Canterbury Tales 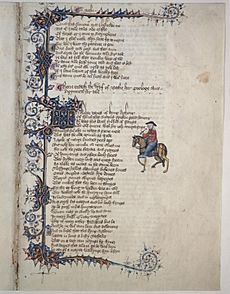 A page from the Ellesmere manuscript showing the Wife of Bath

The Canterbury Tales is written in the type of English that most ordinary people used in Chaucer's day. Chaucer was one of the first authors (writers) who wrote stories in English. Before, stories were written in Latin or French. Some other writers of Chaucer's time also wrote in English. Some of these writers were John Gower, William Langland, and the Pearl Poet.

Chaucer planned the stories before he wrote them but he did not finish his plan. He planned that each character would tell four stories: two while going to Canterbury and two while returning to London. If Chaucer had finished, he would have written 120 stories. He only actually wrote 24. Chaucer began to write the stories in the 1380s. He stopped writing them in the 1390s. Some think that he deliberately did not write the total 120 stories.

Some people think that Chaucer copied ideas from others peoples’ writings because some of the stories in The Canterbury Tales are very similar to them. The characters, however, are very different. The characters have different occupations and personalities. They all tell different types of stories and they tell them in different ways. The big story is about many pilgrims traveling to Canterbury. They are riding horses and the trip takes several days. Chaucer does not say much about the big story and most of the writing is about the stories told by the pilgrims.

All content from Kiddle encyclopedia articles (including the article images and facts) can be freely used under Attribution-ShareAlike license, unless stated otherwise. Cite this article:
The Canterbury Tales Facts for Kids. Kiddle Encyclopedia.