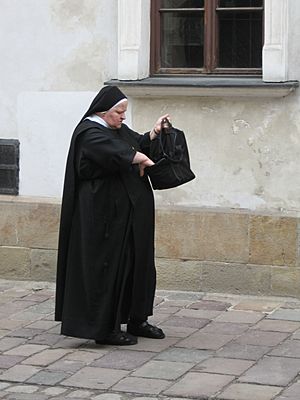 Nun is a woman who made a special vow (or promise) dedicating herself to a religious life. Catholic nuns are said to "take the veil" as a symbol of their new life. Roman Catholic nuns are the most commonly thought of nuns in the West, but nuns are found in different forms of Christianity as well as non-Christian religions such as Buddhism. A fully ordained Buddhist nun is called a bhikkhuni or bhiksuni; ordained novices are sāmaṇerī. A nun is the female version of a monk.

All content from Kiddle encyclopedia articles (including the article images and facts) can be freely used under Attribution-ShareAlike license, unless stated otherwise. Cite this article:
Nun Facts for Kids. Kiddle Encyclopedia.