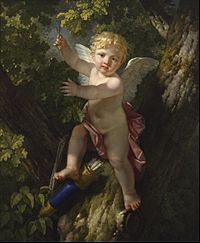 In Roman mythology, Cupid is the god of love. He is equated with the Greek God Eros and one of his Latin names is Eros. He is also called Amor, Latin for love.

There are differing stories about his parentage. Cicero provides three different lineages: son of Mercury (Hermes) and Diana (Artemis), son of Mercury and Venus (Aphrodite), and son of Mars (Ares in Greek mythology) and Venus. Plato mentions two of these, and Hesiod's Theogony, the most ancient Greek theoography, says that Cupid was created coevally with Chaos and the earth.

Throughout ancient mythological writing, there appear to be either two Cupids or two sides to the figure of Cupid. One is the son of Jupiter (Zeus) and Venus. He is a lively youth who delights in pranks and spreading love. The other is a son of Nyx and Erebus.

Cupid's cult was closely associated with Venus', and he was worshipped as seriously as she. Additionally, his power was supposed even greater than his mother's, since he had dominion over the dead in Hades, the creatures of the sea, and the gods in Olympus.

Portrayal in art and literature 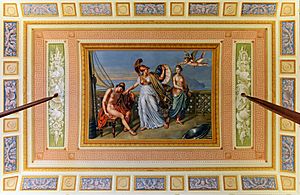 In painting and sculpture, Cupid is portrayed as a nude winged boy armed with a bow and a quiver of arrows. The traditional Christian depiction of a cherub is based on him. On gems and other surviving pieces, he is usually shown amusing himself with childhood play, sometimes driving a hoop, throwing darts, catching a butterfly, or flirting with a nymph.

He is often depicted with his mother (in graphic arts, this is nearly always Venus), playing a horn. He is also shown wearing a helmet and carrying a buckler (perhaps in reference to Virgil's Omnia vincit amor or as political satire on wars for love or love as war).

Cupid figures prominently in ariel poetry, lyrics, and, of course, Elegiac love and metamorphic poetry. In epic poetry, he is less often invoked, but he does appear in Virgil's Aeneid changed into the shape of Ascanius inspiring Dido's love. In later literature, Cupid is frequently invoked as fickle and playful. He is often depicted as carrying two sets of arrows: one set gold-headed, which inspire love, and the other lead-headed, which inspire hatred.

The best known story involving Cupid is the tale of Cupid and Psyche.

All content from Kiddle encyclopedia articles (including the article images and facts) can be freely used under Attribution-ShareAlike license, unless stated otherwise. Cite this article:
Cupid Facts for Kids. Kiddle Encyclopedia.