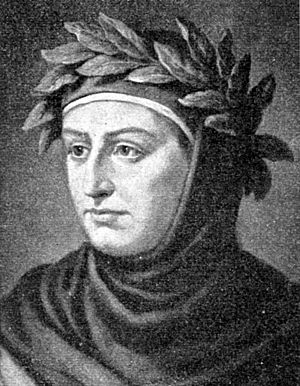 Giovanni Boccaccio (June 16, 1313 - December 21, 1375) was an Italian author and poet. He wrote several famous works, such as On Famous Women and the Decameron. Boccaccio was the first poet, who used ottava rima in longer poems. Thus he started long tradition of employing this form in epic poems. Some of Geoffrey Chaucer's works were based on Boccaccio's poems.

All content from Kiddle encyclopedia articles (including the article images and facts) can be freely used under Attribution-ShareAlike license, unless stated otherwise. Cite this article:
Giovanni Boccaccio Facts for Kids. Kiddle Encyclopedia.