Ganymede a satellite of Jupiter (Jupiter III), is the largest and most massive of the Solar System's moons. The ninth largest object in the Solar System, it is the largest without a substantial atmosphere. It has a diameter of 5,268 km (3,273 mi) and is 8% larger than the planet Mercury. Possessing a metallic core, it is the only moon known to have a magnetic field. Outward from Jupiter, it is the seventh satellite and the third of the Galilean moons, the first group of objects discovered orbiting another planet.

Ganymede's discovery is credited to Galileo Galilei, who was the first to observe it on January 7, 1610. The satellite's name was suggested by astronomer Simon Marius, after the mythological Ganymede, cupbearer of the Greek gods, kidnapped by Zeus.

Beginning with Pioneer 10, several spacecraft have explored Ganymede. The Voyager probes, Voyager 1 and Voyager 2, refined measurements of its size, while Galileo discovered its underground ocean and magnetic field. The next planned mission to the Jovian system is the European Space Agency's Jupiter Icy Moon Explorer (JUICE), due to launch in 2022. After flybys of all three icy Galilean moons, the probe is planned to enter orbit around Ganymede. 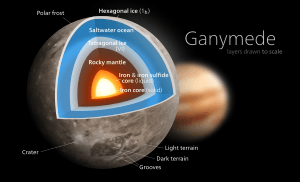 Ganymede is 5262.4 km, or 0.413 Earths wide, it is composed of approximately equal amounts of silicate rock and water ice. Ganymede's crust is made of water ice. Like Earth's crust, it is broken up into plates, which can move. Along the fracture zones, mountain ranges have formed. Because the crust can flow, craters tend to be flat. It is a body with an iron-rich, liquid core, and an internal ocean that may contain more water than all of Earth's oceans combined.

Its surface is composed of two main types of terrain. Dark regions, saturated with impact craters and dated to four billion years ago cover about a third of the satellite. Lighter regions, crosscut by extensive grooves and ridges and only slightly less ancient, cover the remainder. The cause of the light terrain's disrupted geology is not fully known, but was likely the result of tectonic activity due to tidal heating. 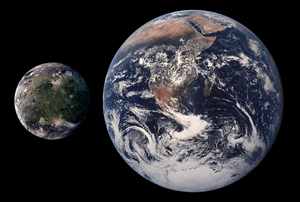 The satellite has a thin oxygen atmosphere that includes ozone. Atomic hydrogen is a minor atmospheric constituent. Whether the satellite has an ionosphere associated with its atmosphere is not yet known. Ganymede also has polar caps, likely composed of water frost. These polar caps were first seen by the Voyager spacecraft.

Cratering is seen on both types of terrain, but is especially extensive on the dark terrain: it appears to be saturated with impact craters and has evolved largely through impact events. One significant feature on Ganymede is a dark plain named Galileo Regio, which contains a series of concentric grooves, or furrows, likely created during a period of geologic activity. 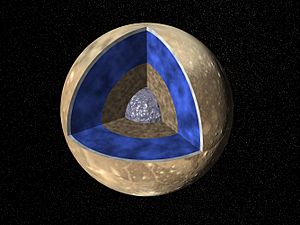 In the 1970s, NASA scientists first suspected that Ganymede has a thick ocean between two layers of ice, one on the surface and one beneath a liquid ocean and atop the rocky mantle. In the 1990s, NASA's Galileo mission flew by Ganymede, confirming the moon's sub-surface ocean. An analysis published in 2014, taking into account the realistic thermodynamics for water and effects of salt, suggests that Ganymede might have a stack of several ocean layers separated by different phases of ice.

In March 2015, scientists reported that measurements with the Hubble Space Telescope of how the aurorae moved over Ganymede's surface suggest it has a subsurface ocean. A large salt-water ocean affects Ganymede's magnetic field, and consequently, its aurora. The evidence suggests that Ganymede's oceans might be the largest in the entire Solar System. There is some speculation on the potential habitability of Ganymede's ocean.

It takes Ganymede 7.15 days to orbit Jupiter. Ganymede orbits Jupiter at the same speed that it spins. One day on Ganymede is equal to about 7.15 days on Earth. Like most known moons, Ganymede is tidally locked to Jupiter, with one side always facing toward the planet. 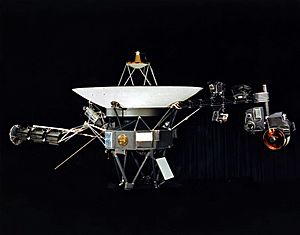 The Europa Jupiter System Mission (EJSM) had a proposed launch date in 2020, and was a joint NASA and ESA proposal for exploration of many of Jupiter's moons including Ganymede. EJSM consisted of the NASA-led Jupiter Europa Orbiter, the ESA-led Jupiter Ganymede Orbiter, and possibly a JAXA-led Jupiter Magnetospheric Orbiter. On 2 May 2012 the European part of the mission, renamed Jupiter Icy Moon Explorer (JUICE), obtained a L1 launch slot in 2022 in the ESA's Cosmic Vision science programme. The spacecraft will orbit Ganymede and conduct multiple flyby investigations of Callisto and Europa.

The Russian Space Research Institute is currently evaluating the Ganymede Lander (GL) mission, with emphasis on astrobiology. The Ganymede Lander would be a partner mission for Jupiter Icy Moon Explorer (JUICE). If selected, it would be launched in 2024, though this schedule might be revised and aligned with JUICE.

A Ganymede orbiter based on the Juno probe was proposed in 2010 for the Planetary Science Decadal Survey.

All content from Kiddle encyclopedia articles (including the article images and facts) can be freely used under Attribution-ShareAlike license, unless stated otherwise. Cite this article:
Ganymede (moon) Facts for Kids. Kiddle Encyclopedia.