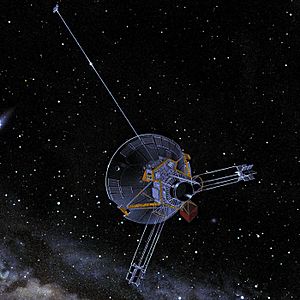 Pioneer 10 was a spacecraft launched by NASA in March 1972. Its aims were to study the planets Jupiter and Saturn as well as the edges of the Solar System. The spacecraft also carried one of two plaques, the Pioneer plaques. On the plaques were images that held some information about humans and earth. The other plaque was on Pioneer 11. The plaques were designed by a team lead by Carl Sagan to communicate with extraterrestrial life should the spacecraft come into contact with it.

There is no longer communication with the probe; the last contact was in 2003 and in 2006 a final attempt at contact failed.

All content from Kiddle encyclopedia articles (including the article images and facts) can be freely used under Attribution-ShareAlike license, unless stated otherwise. Cite this article:
Pioneer 10 Facts for Kids. Kiddle Encyclopedia.