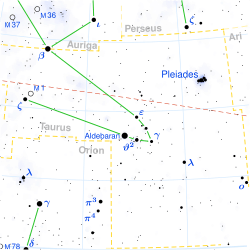 The position of Aldebaran in the Taurus constellation

Aldebaran (α Tau, α Tauri, Alpha Tauri) is an orange giant star. It is about 65 light years away in the zodiac constellation of Taurus. With an average apparent magnitude of 0.87 it is the brightest star in the constellation and is one of the brightest stars in the nighttime sky. The name Aldebaran is Arabic (الدبران al-dabarān) and means "the Follower", presumably because it rises near and soon after the Pleiades. The diameter of Aldebaran is larger than 50 million kilometers. 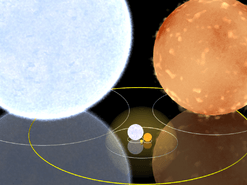 Aldebaran compared to Rigel, Bellatrix, Alpha Centauri A, and the Sun.

In 1993 a companion body was reported. A paper recently accepted shows evidence for a planetary companion.

All content from Kiddle encyclopedia articles (including the article images and facts) can be freely used under Attribution-ShareAlike license, unless stated otherwise. Cite this article:
Aldebaran Facts for Kids. Kiddle Encyclopedia.