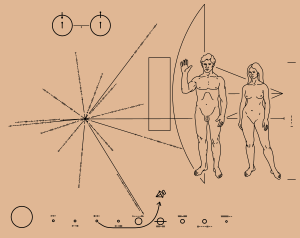 The Pioneer plaques were a pair of plaques that were launched into deep space on Pioneer 10 and Pioneer 11. The same image is on both plaques. The image is made up of many parts.

There is a crude map of our solar system showing a spacecraft leaving the third planet, Earth.

There is pattern of lines that looks like a star burst design. This is a map. There are 15 lines. 14 of the lines have a long binary number engraved along it. The binary numbers are distances. The distances are not in meters or kilometers, but in the universal unit of distance given by the hydrogen particle diagram. The 14 lines give the distance from the sun to 14 pulsars. The 15th line gives the distance from the sun to the center of the galaxy.

All content from Kiddle encyclopedia articles (including the article images and facts) can be freely used under Attribution-ShareAlike license, unless stated otherwise. Cite this article:
Pioneer plaque Facts for Kids. Kiddle Encyclopedia.