Sinope is a non-spherical moon of Jupiter. It was found by Seth Barnes Nicholson at Lick Observatory in 1914, and is named after Sinope of Greek mythology.

Sinope did not get its present name until 1975; before then, it was simply known as Jupiter IX. It was sometimes called "Hades" between 1955 and 1975. 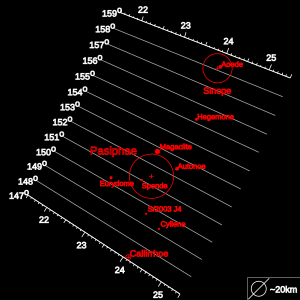 Sinope orbits Jupiter on a high eccentricity and high inclination retrograde orbit. The orbital elements are as of January 2000. They are changing a lot due to Solar and planetary perturbations. It is often believed to belong to the Pasiphaë group. However, given its mean inclination and different colour, Sinope could be also an independent object, captured independently, unrelated to the collision and break-up at the origin of the group. The diagram illustrates Sinope's orbital elements in relation to other moons of the group.

Sinope has an estimated diameter of 38 km (assuming an albedo of 0.04) The moon is red unlike Pasiphae which is grey.

Its infrared spectrum is similar to D-type asteroids also different from Pasiphae. These dissimilarities of the physical parameters suggest a different origin from the core members of the group.

All content from Kiddle encyclopedia articles (including the article images and facts) can be freely used under Attribution-ShareAlike license, unless stated otherwise. Cite this article:
Sinope (moon) Facts for Kids. Kiddle Encyclopedia.