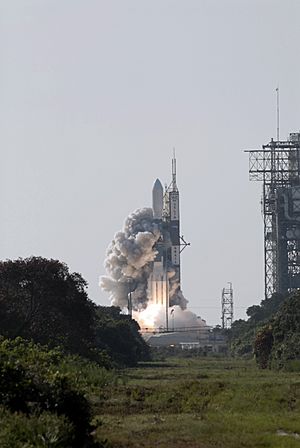 Cape Canaveral Air Force Station (CCAFS) (known as Cape Kennedy Air Force Station from 1963 to 1973) is an installation of the United States Air Force Space Command's 45th Space Wing, headquartered at nearby Patrick Air Force Base. Located on Cape Canaveral in Brevard County, Florida, CCAFS is the primary launch head of America's Eastern Range with three launch pads currently active (Space Launch Complexes 37B, 40, and 41). Popularly known as "Cape Kennedy" from 1963 to 1973, and as "Cape Canaveral" from 1949 to 1963 and from 1973 to the present, the facility is south-southeast of NASA's Kennedy Space Center on adjacent Merritt Island, with the two linked by bridges and causeways. The Cape Canaveral Air Force Station Skid Strip provides a 10,000-foot (3,000 m) runway close to the launch complexes for military airlift aircraft delivering heavy and outsized payloads to the Cape.

The CCAFS area had been used by the United States government to test missiles since 1949, when President Harry S. Truman established the Joint Long Range Proving Ground at Cape Canaveral. The location was among the best in the continental United States for this purpose, as it allowed for launches out over the Atlantic Ocean, and is closer to the equator than most other parts of the United States, allowing rockets to get a boost from the Earth's rotation.

Many space missions have been launched from CCAFS including:

All content from Kiddle encyclopedia articles (including the article images and facts) can be freely used under Attribution-ShareAlike license, unless stated otherwise. Cite this article:
Cape Canaveral Air Force Station Facts for Kids. Kiddle Encyclopedia.