Io (Jupiter I) is the innermost of the four Galilean moons of the planet Jupiter. It is the fourth-largest moon, has the highest density of all the moons, and has the least amount of water of any known astronomical object in the Solar System. It was discovered in 1610 and was named after the mythological character Io, a priestess of Hera who became one of Zeus' partners.

Jupiter has 66 moons, but only four are large ones comparable to our Moon. Io is one of these four, and the third largest. Io is 3642.6 km, or 0.28 Earths, wide. It only has a mass of about 1.4% of the mass of Earth. It takes 42 hours (1¾ Earth days) for Io to rotate on its axis. It also takes 42 hours for Io to complete one orbit around Jupiter. Since these numbers are the same, it means that the same side of Io always faces Jupiter. Earth's moon works the same way, which is why we only see one side of the moon from earth. If you stood on the surface of Io, you would weigh less than you do on Earth. A person who weighs 200 pounds (90kg) on Earth would weigh about 36 pounds (16kg) on Io. So the gravity, of course, pulls less on you. 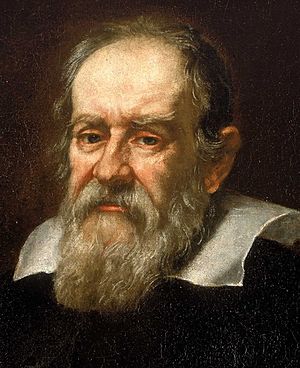 Galileo Galilei, the discoverer of Io

Io played a significant role in the development of astronomy in the 17th and 18th centuries. It was discovered in January 1610 by Galileo Galilei, along with the other Galilean satellites. This discovery furthered the adoption of the Copernican model of the Solar System, the development of Kepler's laws of motion, and the first measurement of the speed of light.

From Earth, Io remained just a point of light until the late 19th and early 20th centuries, when it became possible to see its large-scale surface features, such as the dark red polar and bright equatorial regions. In 1979, the two Voyager spacecraft revealed Io to be a geologically active world, with numerous volcanic features, large mountains, and a young surface with no obvious impact craters. 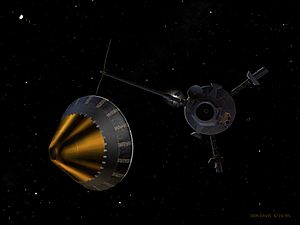 The Galileo spacecraft performed several close flybys in the 1990s and early 2000s, obtaining data about Io's interior structure and surface composition. These spacecraft also revealed the relationship between Io and Jupiter's magnetosphere and the existence of a belt of high-energy radiation centered on Io's orbit. Further observations have been made by Cassini–Huygens in 2000 and New Horizons in 2007, as well as from Earth-based telescopes and the Hubble Space Telescope.

The first spacecraft to pass by Io were the twin Pioneer 10 and 11 probes on 3 December 1973 and 2 December 1974. Radio tracking provided an improved estimate of Io's mass, which, along with the best available information of Io's size and was composed primarily of silicate rock rather than water ice. The Pioneers also revealed the presence of a thin atmosphere at Io and intense radiation belts near the orbit of Io. The camera on board Pioneer 11 took the only good image of Io obtained by either spacecraft, showing its north polar region. Close-up images were planned during Pioneer 10s encounter with Io, but those observations were lost because of the high-radiation environment.

Based on their experience with the ancient surfaces of the Moon, Mars, and Mercury, scientists expected to see numerous impact craters in Voyager 1s first images of Io. The density of impact craters across Io's surface would have given clues to Io's age. However, they were surprised to discover that the surface was almost completely lacking in impact craters, but was instead covered in smooth plains dotted with tall mountains, pits of various shapes and sizes, and volcanic lava flows. 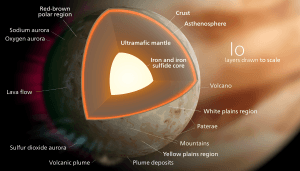 Compared to most worlds observed to that point, Io's surface was covered in a variety of colorful materials (leading Io to be compared to a rotten orange or to pizza) from various sulfurous compounds. The lack of impact craters indicated that Io's surface is geologically young, like the terrestrial surface; volcanic materials continuously bury craters as they are produced. This result was spectacularly confirmed as at least nine active volcanoes were observed by Voyager 1. 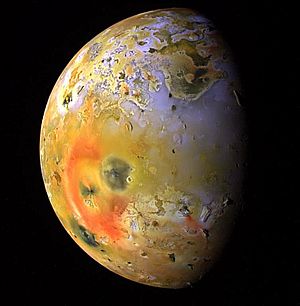 With over 400 active volcanoes, Io is the most geologically active object in the Solar System. This extreme geologic activity is the result of tidal heating from friction generated within Io's interior as it is pulled between Jupiter and the other Galilean satellites—Europa, Ganymede and Callisto.

Several volcanoes produce plumes of sulfur and sulfur dioxide that climb as high as 500 km (300 mi) above the surface. Io's surface is also dotted with more than 100 mountains that have been uplifted by extensive compression at the base of Io's silicate crust. Some of these peaks are taller than Mount Everest.

Unlike most satellites in the outer Solar System, which are mostly composed of water ice, Io is primarily composed of silicate rock surrounding a molten iron or iron-sulfide core. Most of Io's surface is composed of extensive plains coated with sulfur and sulfur-dioxide frost. 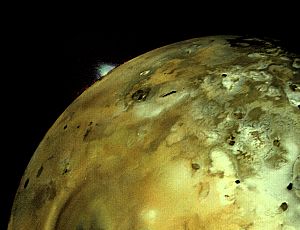 Io's volcanism is responsible for many of its unique features. Its volcanic plumes and lava flows produce large surface changes and paint the surface in various subtle shades of yellow, red, white, black, and green, largely due to compounds of sulfur. When sulfur warms up and cools down, it changes colour. Numerous extensive lava flows, several more than 500 km (300 mi) in length, also mark the surface. The materials produced by this volcanism make up Io's thin, patchy atmosphere and Jupiter's extensive magnetosphere. 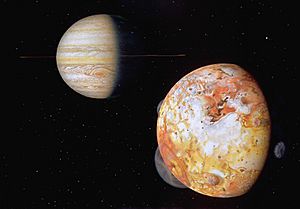 Jupiter and Io as seen by Voyager 1

All content from Kiddle encyclopedia articles (including the article images and facts) can be freely used under Attribution-ShareAlike license, unless stated otherwise. Cite this article:
Io (moon) Facts for Kids. Kiddle Encyclopedia.