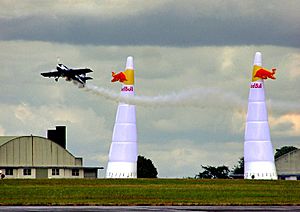 This acrobatic airplane is pulling up in a +g maneuver; the pilot is experiencing several g's of inertial acceleration in addition to the force of gravity. The cumulative vertical axis forces acting upon his body make him momentarily 'weigh' many times more than normal.

The g-force of an object is its acceleration relative to free fall. On earth the force is 1g, or 9.8 meters per second squared (m/s2), but astronauts experience unusually high and low g-forces. g-force can also be seen on rollercoasters. When the coaster goes down the drop, you are pushed back into your seat because of g-force.

All content from Kiddle encyclopedia articles (including the article images and facts) can be freely used under Attribution-ShareAlike license, unless stated otherwise. Cite this article:
G-Force Facts for Kids. Kiddle Encyclopedia.