Pizza is a type of food that was created in Italy. It is made by putting "Toppings" (such as cheese, sausages, pepperoni, vegetables, tomatoes, spices and herbs) over a piece of bread covered with sauce; most often tomato, but sometimes butter-based sauces are used. (The piece of bread is usually called a "pizza crust".) Almost any kind of topping can be put over a pizza. The toppings people use are different in different parts of the world. Pizza comes from Italy, from Neapolitan cuisine, but has become popular in many parts of the world.

The origin of the word Pizza is uncertain. The food was invented in Naples about 200 years ago. It is the name for a special type of flatbread, made with special dough. The pizza enjoyed a second birth as it was taken to the United States in the later 19th century.

Flatbreads like the focaccia from Liguria have been known for a very long time. Pizzas need to be baked at temperatures of 200–250 °C. Hardly any household oven could reach such temperatures at the time. Because of this, the pizza was made at home, and then given to the town bakery to bake. In June 1889, the Neapolitan chef Raffaele Esposito created the "Margherita" in honour of Queen Margherita, and was the first pizza to include cheese.

Pizza was brought to the United States with Italian immigrants in the late nineteenth century; and first appeared in areas where Italian immigrants concentrated. The country's first pizzeria, Lombardi's, opened in 1905. Veterans returning from World War II's Italian Campaign were a ready market for pizza. Since then pizza consumption has exploded in the U.S. Pizza chains such as Domino's, Pizza Hut, and Papa John's, have outlets all over the nation. Thirteen percent of the U.S. population eats pizza on any given day. 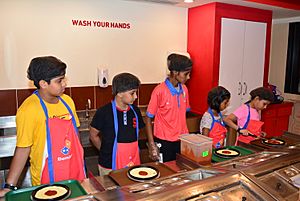 Pizza is prepared fresh, frozen, and as portion-size slices or pieces. Methods have been developed to overcome challenges such as preventing the sauce from combining with the dough and producing a crust that can be frozen and reheated without becoming rigid. There are frozen pizzas with raw ingredients and self-rising crusts.

Another form of uncooked pizza is available from take and bake pizzerias. This pizza is assembled in the store, then sold to customers to bake in their own ovens. Some grocery stores sell fresh dough along with sauce and basic ingredients, to complete at home before baking in an oven. 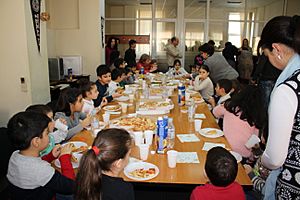 Kids Enjoying some Pizza in ATC

In restaurants, pizza can be baked in an oven with stone bricks above the heat source, an electric deck oven, a conveyor belt oven or, in the case of more expensive restaurants, a wood or coal-fired brick oven. On deck ovens, pizza can be slid into the oven on a long paddle, called a peel, and baked directly on the hot bricks or baked on a screen (a round metal grate, typically aluminum). Prior to use, a peel may be sprinkled with cornmeal to allow pizza to easily slide onto and off of it. When made at home, it can be baked on a pizza stone in a regular oven to reproduce the effect of a brick oven. Cooking directly in a metal oven results in too rapid heat transfer to the crust, burning it. Aficionado home-chefs sometimes use a specialty wood-fired pizza oven, usually installed outdoors. Dome-shaped pizza ovens have been used for centuries, which is one way to achieve true heat distribution in a wood-fired pizza oven. Another option is grilled pizza, in which the crust is baked directly on a barbecue grill. Greek pizza, like Chicago-style pizza, is baked in a pan rather than directly on the bricks of the pizza oven. 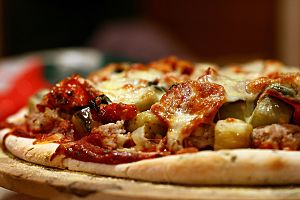 A pizza just removed from an oven, with a close-up view of the cornicione (the outer edge)

The bottom of the pizza, called the "crust", may vary widely according to style, thin as in a typical hand-tossed Neapolitan pizza or thick as in a deep-dish Chicago-style. It is traditionally plain, but may also be seasoned with garlic or herbs, or stuffed with cheese. The outer edge of the pizza is sometimes referred to as the cornicione. Pizza dough often contains sugar, both to help its yeast rise and enhance browning of the crust.

Dipping sauce specifically for pizza was invented by American pizza chain Papa John's Pizza in 1984 and has since become popular when eating pizza, especially the crust. 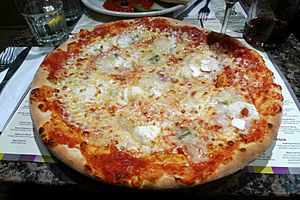 Mozzarella is commonly used on pizza, with the highest quality buffalo mozzarella produced in the surroundings of Naples. Eventually, other cheeses were used well as pizza ingredients, particularly Italian cheeses including provolone, pecorino romano, ricotta, and scamorza. Less expensive processed cheeses or cheese analogues have been developed for mass-market pizzas to produce desirable qualities like browning, melting, stretchiness, consistent fat and moisture content, and stable shelf life. This quest to create the ideal and economical pizza cheese has involved many studies and experiments analyzing the impact of vegetable oil, manufacturing and culture processes, denatured whey proteins and other changes in manufacture. In 1997 it was estimated that annual production of pizza cheese was 1 million tonnes (1,100,000 short tons) in the U.S. and 100,000 tonnes (110,000 short tons) in Europe. 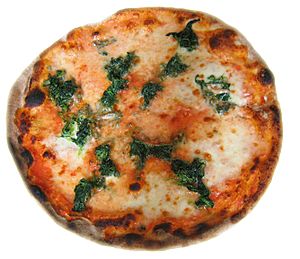 Authentic Neapolitan pizza (pizza napoletana) is made with San Marzano tomatoes, grown on the volcanic plains south of Mount Vesuvius, and mozzarella di bufala Campana, made with milk from water buffalo raised in the marshlands of Campania and Lazio. This mozzarella is protected with its own European protected designation of origin. Other traditional pizzas include pizza alla marinara, which is topped with marinara sauce and is supposedly the most ancient tomato-topped pizza, pizza capricciosa, which is prepared with mozzarella cheese, baked ham, mushroom, artichoke and tomato, and pizza pugliese, prepared with tomato, mozzarella and onions.

A popular variant of pizza in Italy is Sicilian pizza (locally called sfincione or sfinciuni), a thick-crust or deep-dish pizza originating during the 17th century in Sicily: it is essentially a focaccia that is typically topped with tomato sauce and other ingredients. Until the 1860s, sfincione was the type of pizza usually consumed in Sicily, especially in the Western portion of the island. Other variations of pizzas are also found in other regions of Italy, for example pizza al padellino or pizza al tegamino, a small-sized, thick-crust and deep-dish pizza typically served in Turin, Piedmont. 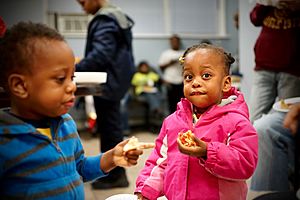 13% of the United States population consumes pizza on any given day. Pizza chains such as Domino's Pizza, Pizza Hut, and Papa John's, pizzas from take and bake pizzerias, and chilled or frozen pizzas from supermarkets make pizza readily available nationwide. 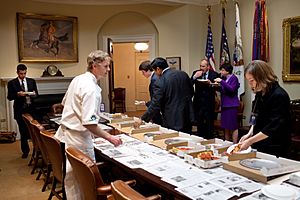 Pizza banquet in the White House

Another variation is grilled pizza, created by taking a fairly thin, round (more typically, irregularly shaped) sheet of yeasted pizza dough, placing it directly over the fire of a grill and then turning it over once the bottom has baked and placing a thin layer of toppings on the baked side. Toppings may be sliced thin to ensure that they heat through, and chunkier toppings such as sausage or peppers may be precooked before being placed on the pizza. Garlic, herbs, or other ingredients are sometimes added to the pizza or the crust to maximize the flavor of the dish.

Grilled pizza was offered in the United States at the Al Forno restaurant in Providence, Rhode Island by owners Johanne Killeen and George Germon in 1980. Although it was inspired by a misunderstanding that confused a wood-fired brick oven with a grill, grilled pizza did exist prior to 1980, both in Italy, and in Argentina where it is known as pizza a la parrilla. It has become a popular cookout dish, and there are even some pizza restaurants that specialize in the style. The traditional style of grilled pizza employed at Al Forno restaurant uses a dough coated with olive oil, strained tomato sauce, thin slices of fresh mozzarella, and a garnish made from shaved scallions, and is served uncut. The final product can be likened to flatbread with pizza toppings. Another Providence establishment, Bob & Timmy's Grilled Pizza, was featured in a Providence-themed episode of the Travel Channel's Man v. Food Nation in 2011.

Argentina, and more specifically Buenos Aires, received a massive Italian immigration at the turn of the 19th century. Immigrants from Naples and Genoa opened the first pizza bars, though over time Spanish residents came to own the majority of the pizza businesses.

Standard Argentine pizza has a thicker crust, called "media masa" (half dough) than traditional Italian style pizza and includes more cheese. Argentine gastronomy tradition, served pizza with fainá, which is a Genovese chick pea-flour dough placed over the piece of pizza, and moscato wine. The most popular variety of pizza is called "muzzarella" (mozzarella), similar to Neapolitan pizza (bread, tomato sauce and cheese) but made with a thicker "media masa" crust, triple cheese and tomato sauce, usually also with olives. It can be found in nearly every corner of the country; Buenos Aires is considered the city with the most pizza bars by person of the world. Other popular varieties include jam, tomato slices, red pepper and longaniza. Two Argentine-born varieties of pizza with onion, are also very popular: fugazza with cheese and fugazzetta. The former one consists in a regular pizza crust topped with cheese and onions; the later has the cheese between two pizza crusts, with onions on top. 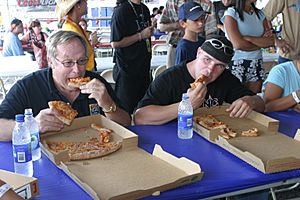 There are several instances of more expensive pizzas, such as the GB£4,200 "Pizza Royale 007" at Haggis restaurant in Glasgow, Scotland, which has caviar, lobster and is topped with 24-carat gold dust, and the US$1,000 caviar pizza made by Nino's Bellissima pizzeria in New York City, New York. However, these are not officially recognized by Guinness World Records. Additionally, a pizza was made by the restaurateur Domenico Crolla that included toppings such as sunblush-tomato sauce, Scottish smoked salmon, medallions of venison, edible gold, lobster marinated in cognac, and champagne-soaked caviar. The pizza was auctioned for charity in 2007, raising GB£2,150. 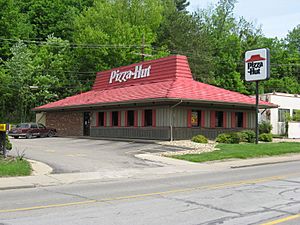 Frozen pizza is pizza that has been prepared beforehand, and is then deep-frozen, to be distributed in supermarkets. It is among the most successful and popular types of convenience food.

All content from Kiddle encyclopedia articles (including the article images and facts) can be freely used under Attribution-ShareAlike license, unless stated otherwise. Cite this article:
Pizza Facts for Kids. Kiddle Encyclopedia.