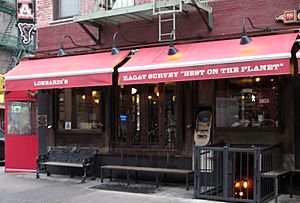 Gennaro Lombardi, later known as the man who brought pizza to America, started the business in 1897. It was still a grocery store at 53½ Spring Street. It began selling tomato pies wrapped in paper. They used to deliver it during lunchtime to workers from factories in the area. In 1905, Lombardi received a business license to operate a pizza restaurant. He later passed the business on to his son, George.

All content from Kiddle encyclopedia articles (including the article images and facts) can be freely used under Attribution-ShareAlike license, unless stated otherwise. Cite this article:
Lombardi's Pizza Facts for Kids. Kiddle Encyclopedia.