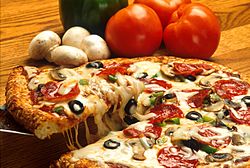 As immigrants from the different regions of Italy settled throughout the various regions of the United States, many brought with them a distinct regional Italian culinary tradition. Many of these foods and recipes developed into new favorites for the townspeople and later for Americans nationwide. 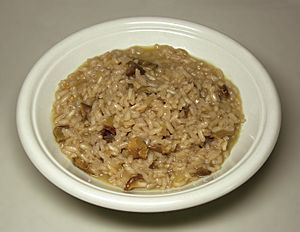 Most of these immigrants arrived in the United States during the late 19th and early 20th centuries, and during this time, many Italians coming from Naples and Sicily moved to large American cities, such as New York City, Philadelphia, Chicago, St. Louis, Boston, Los Angeles, and San Francisco; the immigrant cuisine is thus largely derived from Neapolitan and Sicilian cuisine, and is particularly associated with these locations.

Over time, through an increased appreciation of Italian cuisine in the United States, as well as increased imports into the United States from Italy, there has been a push towards producing more authentic dishes, which use techniques and ingredients that are more native to Italy.

American cuisine has readily received innovations from Italy, such as espresso (which evolved into specialty coffee drinks, now ubiquitous in American life), tiramisu, and Nutella.

On the other hand, e.g. pasta alla carbonara, a dish unrecorded in Italy before World War II, may be due to an American influence in relationship to the allied liberation of Rome in 1944. Many Italians then were happy to use powdered eggs and bacon supplied by the United States and their armed forces for pasta dishes.

Italian-American food and Mediterranean cuisine has been highly influential in the American diet. It is one of the top three cuisines in the United States, according to the National Restaurant Association:

Prof. Donna Gabaccia in "Italian Americana" Winter and Summer 1998 volumes, no. 1 & 2 states that "food and cooking are powerful expressions of our ties to the past and to our current identity".

"Italian, Mexican and Chinese (Cantonese) cuisines have joined the mainstream. These three cuisines have become so ingrained in the American culture that they are no longer foreign to the American palate. According to the National Restaurant Association study, more than nine out of 10 consumers are familiar with and have tried these foods, and about half report eating them frequently".

Rated high on the list of popular, or trending, items in the survey include: Mediterranean flatbread, ciabatta bread, espresso and specialty coffee drinks. Pizza and pasta are also common dishes in the United States; however, they are often presented in very different forms than in Italy.

There is a strong association between Italian-American cuisine with the history of winemaking in the United States.

Many Italian wines were first introduced to the United States in the late 1700s. Italian vintners were first brought to the state of Florida in 1766 by Dr. Andrew Turnbull, a British Consul at Smyrna (now Izmir). Philip Mazzei, an Italian physician, and close friend of U.S. President Thomas Jefferson, also helped to cultivate vineyards, olives, and other Mediterranean fruit with the help of Italians.

In later years, American viticulture was more influenced by the Italian diaspora of the transatlantic migrations, which steadily brought more Italians to America from the 1870s through the 1920s. Most of these Italians entered the East Coast of the United States through Ellis Island, whereas many of those quickly passed through to the American West Coast, where California still had its famous "Gold Rush".

In California, Italian-Americans were inspired by the expanse of rolling hills and fertile fields. Prior to Prohibition starting in 1919, many wineries had made their start: Seghesio, Simi, Sebastiani Vineyards and Foppiano began in the late 19th century and remain in operation today. Others included Giuseppe Magliavacca's Napa winery, Secondo Guasti's Italian Vineyard Company and Andrea Sbarbaro's Italian-Swiss Colony.

From 1919 until the repeal of Prohibition in 1933, many Italian-Americans struggled to keep their vineyards going. Many remained through providing sacramental wine to the Catholic Church or grape juice to the general market. These few holdouts can be credited with salvaging America's viticulture heritage, in an industry that values the longevity and tradition of the vine and its produce.

Chianti, when first introduced to the United States, was widely generic; however, after a decline in the overall quality of Chianti during the mid-20th century, improvements in recipes and techniques led to a variety of Chianti, ranging from simple to very high-end Classicos. 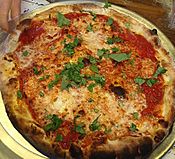 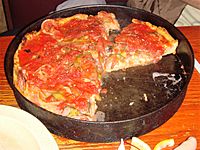 All content from Kiddle encyclopedia articles (including the article images and facts) can be freely used under Attribution-ShareAlike license, unless stated otherwise. Cite this article:
Italian-American cuisine Facts for Kids. Kiddle Encyclopedia.