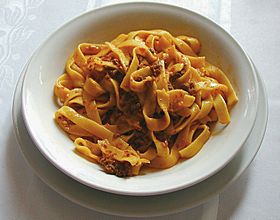 Bolognese sauce is a sauce made with meat that is then mixed with pasta before eating. It is called Ragù alla bolognese in Italy. The sauce came from Bologna in Italy. Most Italian people eat their Bolognese sauce with tagliatelle, a broad, flat type of pasta. It can also be served with ribbon or tube shaped pasta. 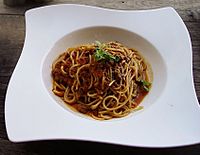 In 1982, the Bolognese delegation, said that the recipe must only be made of beef, pancetta (a type of bacon), onions, carrots, celery, tomato paste, meat broth, red wine and milk or cream. There are different recipes of Bolognese sauce. Some of the recipes contain chopped pork or pork sausage. Mushrooms are sometimes added.

Spaghetti Bolognese is popular outside of Italy where the sauce is put on a plate of spaghetti with a little bit of grated cheese put on. In China Bolognese sauce is served with noodles and it is called Chinese spaghetti.

However, these different ways of making the recipe are never eaten in Bologna. They do use the recipe together with béchamel sauce to make lasagna.

All content from Kiddle encyclopedia articles (including the article images and facts) can be freely used under Attribution-ShareAlike license, unless stated otherwise. Cite this article:
Bolognese sauce Facts for Kids. Kiddle Encyclopedia.