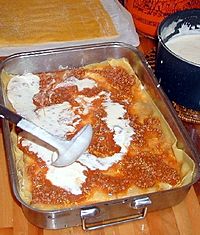 Béchamel sauce is a key ingredient in many lasagne recipes

Béchamel sauce (pronounced /beɪʃəˈmɛl/ in English in French in Italian), also known as white sauce, is a basic mother sauce. It can be used to make other sauces, such as Mornay sauce, which is Béchamel and cheese. This basic sauce is usually made today by whisking scalded milk gradually into a white flour-butter roux (equal part clarified butter and flour), though it can also be made by whisking a kneaded flour-butter beurre manié into scalded milk. The thickness of the final sauce depends on the proportions of milk and flour. Escoffier adds salt and an onion stuck with a clove.

It is named after Louis de Béchamel.

All content from Kiddle encyclopedia articles (including the article images and facts) can be freely used under Attribution-ShareAlike license, unless stated otherwise. Cite this article:
Béchamel sauce Facts for Kids. Kiddle Encyclopedia.