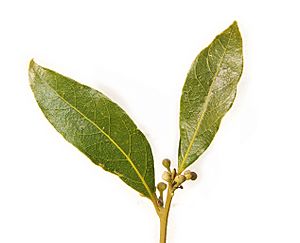 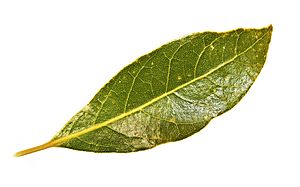 The leaf of the California bay tree (Umbellularia californica), also known as 'California laurel', 'Oregon myrtle', and 'pepperwood', is similar to the Mediterranean bay but has a stronger flavor.

The leaf of the Cinnamomum tejpata (malabathrum) tree is similar in fragrance and taste to cinnamon bark, but milder. In appearance, it is similar to the other bay leaves but is culinarily quite different, having an aroma and flavor more similar to that of Cassia. It is inaccurately called a bay leaf as it is of a different genus (though the same family) as the bay laurel.

All content from Kiddle encyclopedia articles (including the article images and facts) can be freely used under Attribution-ShareAlike license, unless stated otherwise. Cite this article:
Bay leaf Facts for Kids. Kiddle Encyclopedia.