Porchetta is a savory, fatty, and moist boneless pork roast of Italian culinary tradition. The carcass is deboned, arranged carefully stuffed with liver, wild fennel, all fat and skin still on spitted, and/or roasted, traditionally over wood for at least 8 hours. Porchetta is usually heavily salted in addition to being stuffed with garlic, rosemary, fennel, or other herbs, often wild. Porchetta has been selected by the Italian Ministry of Agricultural, Food and Forestry Policy as a prodotto agroalimentare tradizionale (“traditional agricultural-food product”, one of a list of traditional Italian foods held to have cultural relevance). 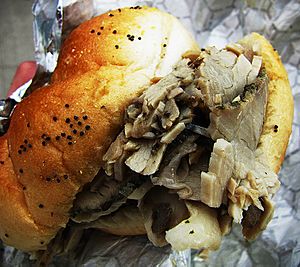 A close-up of a porchetta sandwich.

Although popular in the whole country, porchetta originated in central Italy, with Ariccia (in the Province of Rome) being the town most closely associated with it. Elsewhere, it is considered a celebratory dish. Across Italy, porchetta is usually sold by pitchmen with their typically white-painted vans, especially during public displays or holidays, and it can be served in a panino. It's a common street food in Rome and Lazio served as a filling for pizza bianca. It is also eaten as a meat dish in many households or as part of a picnic.

Porchetta is one of the two iconic culinary products of the Lazio region, the other being the sheep cheese pecorino romano. Porchetta is also common in Abruzzo. Porchetta abruzzese is generally slow roasted with rosemary, garlic, and pepper. Porchetta from Umbria is stuffed with the pig's chopped entrails mixed with lard, garlic, salt and plenty of pepper and wild fennel.

Porchetta trevigiana (from Treviso) was developed in 1919. In it, a pig is slaughtered when one year old, and then its meat is stuffed with salt, pepper, wild fennel, garlic and white wine. It is then roasted inside an oven for seven hours at 90 °C (194 °F). The porchetta is today a popular dish in Venetian cuisine.

The dish is also a staple of Sardinian cuisine. There it is known as "porceddu" and is roasted over juniper and myrtle wood fires.

Porchetta was introduced to the United States by Italian immigrants of the early 20th century, especially immigrants from Abruzzo, and is sometimes referred to as "Italian pulled pork," "roast pork," or "Italian roast pork." It is, in many places, served on a sandwich with greens (rapini or spinach) and provolone cheese.

Bridgeport, Connecticut, has a Saturday afternoon lunch tradition of porchetta sandwiches served at community restaurants and taverns that dates back to the first wave of Italian immigration in the early 20th century. The dish is served with pepperoncini.

The porchetta and roast beef sandwich traditions are celebrated in the form of an annual bus tour every first Saturday in March in Bridgeport, Connecticut, organized by The Porchetta Project.

Metro West Massachusetts has a fierce following of porchettas. Local organizations often hold Porchetta Dinners as fund raisers which are very popular and well attended. Many local shops make roast for purchase, cooked or uncooked. Notable areas are Milford and Framingham, Massachusetts, as they both have large Italian populations. The spices used can vary greatly within this area, some will go full bore with garlic, black pepper, salt, fennel, rosemary, and sage, others will use only garlic, salt, pepper, and fennel. The stem of the fennel plant is often substituted for the fennel seed. These local roasts are made from the Boston butt, or shoulder of the pig.

Porchetta is also very popular in the Northern Ontario (notably Sudbury and Sault Ste. Marie) and Southern Ontario (in areas such as Hamilton and St. Catharines), and the term "porchetta" is widely used by Italian-Canadians, instead of simply "roast pork". Porchetta (sometimes spelled "porketta") is also popular in the Upper Midwest, having been brought to the Michigan and Minnesota Iron ranges by Italian immigrants.

Italian settlers in Sudbury passed on their love for porchetta to their children and friends in this region. Old family secrets of spicing, rolling and roasting are passed on, extending commercially into butcher shops as well as in the form of fast-food sandwiches offered in various locally owned shops. "Porketta Bingo", a variation on the traditional Canadian meat draw, is a popular Saturday afternoon activity in Sudbury. Game winners receive one pound of porchetta and a sourdough bun. There are usually between four and seven rounds of six games each, depending on the establishment. Proceeds of Porketta Bingo usually go to a local charity or are donated to local hockey associations. 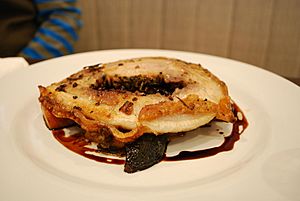 All content from Kiddle encyclopedia articles (including the article images and facts) can be freely used under Attribution-ShareAlike license, unless stated otherwise. Cite this article:
Porchetta Facts for Kids. Kiddle Encyclopedia.