Kids Encyclopedia Facts
This page is about the Canadian city. For other uses, see St. Catharines (disambiguation).

St. Catharines is the largest city in Canada's Niagara Region and the sixth largest urban area in the province of Ontario. As of 2016, it has an area of 96.13 square kilometres (37.12 sq mi), 133,113 residents, and a metropolitan population of 406,074. It lies in Southern Ontario, 51 kilometres (32 mi) south of Toronto across Lake Ontario, and is 19 kilometres (12 mi) inland from the international boundary with the United States along the Niagara River. It is the northern entrance of the Welland Canal. Residents of St. Catharines are known as St. Cathariners. St. Catharines carries the official nickname "The Garden City" due to its 1,000 acres (4 km2) of parks, gardens, and trails.

St. Catharines is between the Greater Toronto and Hamilton Area (GTHA) and the Canada–U.S. border at Fort Erie. Manufacturing is the city's dominant industry, as noted by the heraldic motto, "Industry and Liberality". General Motors of Canada, Ltd., the Canadian subsidiary of General Motors, was the city's largest employer, a distinction now held by the District School Board of Niagara. THK Rhythm Automotive, formerly TRW, operates a plant in the city, although in recent years, employment there has shifted from heavy industry and manufacturing to services.

St. Catharines lies on one of the main telecommunications backbones between Canada and the United States, and as a result a number of call centres operate in the city. It is designated an Urban Growth Centre by the Growth Plan for the Greater Golden Horseshoe, intended to achieve a minimum density target of 150 jobs and residents combined per hectare by 2032 or earlier.

According to the 2011 census, there were 131,400 people residing in city of St. Catharines, located in the province of Ontario. In the five years between 2006 and 2011, the population of St. Catharines decreased by 0.4%, while Ontario as a whole grew by 5.7 percent.

As of the 2006 census, 47.8% of the city's population were male and 52.2% were female. Minors (youth under the age of 19) totalled 22.6 percent of the population compared to pensioners who number 18.1 percent. This compares with the Canadian average of 24.4 percent (minors) and 13.7 percent (pensioners). The average age of St. Catharines residents is 41.7 compared to the Canadian average of 39.5.

Christianity is the dominant religion of the city. Some 81.0 percent of the population profess a Christian faith, the largest being various Protestant groups (42.9%), followed by Roman Catholicism (34.2%), while the remaining consists of Orthodox, and independent Christian groups. Non-Christian groups are also present, namely Islam (1.5%), Judaism (0.5%), and Buddhism (0.5%), and the city contains a synagogue and Jewish community centre as well a mosque. The remaining 16.5% report other or no religion.

St. Catharines is home to Brock University (established 1964), a modern comprehensive university on the Niagara Escarpment. A partnership between the university and the Ontario Grape and Wine Industry established the city as a centre for cool-climate grape and wine research. Brock offers an Honours Bachelor of Science in Oenology and Viticulture.

Concordia Lutheran Theological Seminary, a post graduate institution of the Lutheran Church–Canada, operates on the campus of Brock University.

Ridley College, near the city's downtown core in the Western Hill neighbourhood, is a distinguished co-educational boarding and day school. It was established as a boys' school in 1889, and became co-educational in 1973.

A campus of the Niagara College of Applied Arts and Technology is near the city's east end. Niagara College is the only fully licensed teaching winery in Canada. The "Niagara College Teaching Winery" (or NCT for short) has created award-winning wines. Niagara College has also taken home various medals from international wine competitions such as "Cuvee", "The Ontario Wine Awards" and "The Finger Lakes International Competition" to name a few. The school's Horticultural Campus was once on 360 Niagara Street in the 1970s–1990s but has since been relocated to Niagara-on-the-Lake. One of its greatest teachers, R. Roy Forster, was recognized with the Order of Canada on 14 April 1999, for his work in creating the VanDusen Botanical Garden in Vancouver, British Columbia.

In 2007, the OHL's Mississauga IceDogs relocated to St. Catharines and became the Niagara IceDogs. The IceDogs played out of the Jack Gatecliff Arena, which was renamed the Gatorade Garden City Complex. In 2014, the IceDogs moved to the newly built Meridian Centre. Since starting out the team has won the Emms Trophy in 2010–2011 & 2018–2019. They have also won the Bobby Orr Trophy during 2011–2012 season and 2015–2016 season, qualifying for the OHL Finals. They would be beaten both times by the London Knights. The team has had numerous NHL alumni including Alex Pietrangelo, Dougie Hamilton, Vince Dunn, Ryan Strome, Akil Thomas and Mark Visentin.

In 2015, the National Basketball League of Canada announced that Niagara had been awarded a new franchise to play in the Meridian Centre. The team, named the Niagara River Lions, began play in 2015 where they reached the conference quarterfinals. The team joined the Canadian Elite Basketball League after the 2017–18 season. The team has yet to have a successful season since joining the league.

The city was the home of the New York–Penn League's St. Catharines Blue Jays, the Short-season A affiliate of the Toronto Blue Jays, from 1986 to 1999. In 1996 the team was renamed the St. Catharines Stompers, and was subsequently sold and relocated to Queens, New York City in late 1999, where they became the Queens Kings.

St. Catharines Tigers RFC was formed in 1978. Beginning in 2015, the Tigers joined the Niagara Wasps RFC and play at their field in Thorold.

The Canadian Soccer League's St. Catharines Wolves are one of the most successful professional soccer teams in Canada, and play at Club Roma in the west-end of the city. 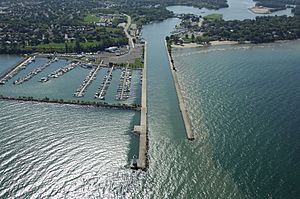 Martindale Pond next to Martindale Road in St. Catharines, Ontario

Martindale Pond in St. Catharines' Port Dalhousie is the site of the annual Royal Canadian Henley Regatta, a world-class event that brings over 3,000 athletes from various nations to the city. The site hosted the FISA World Rowing Championships in 1970 and in 1999. More recently, the World Master's Rowing Championship was held at the Martindale Pond in the summer of 2010, with $500,000 in improvements to the facility such as: a weed harvester, new docking and a new timing system. There are currently talks to bring the Canadian Rowing Hall of Fame to St. Catharines sometime in the near future. The pond is also home to the St. Catharines rowing club, Brock University rowing club, Ridley College rowing club and to the annual CSSRA Championships, which draws hundreds of high school athletes from Canada, the U.S. and Mexico. The Martindale Pond or Henley, continues to hold its world-renowned status as a major rowing venue in the world. The rowing event in the Pan American Games were held in St. Catharines in 2015. Several Olympic medallists in rowing are from St. Catharines, including Melanie Kok, Buffy Williams, and Dave Boyes. 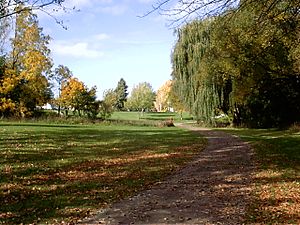 Walker's Creek, one of the paths and parks for which St. Catharines is known

The city's trail system offers over 90 kilometres (55 mi) of accessible pathways that are suitable for walking, jogging, cycling, hiking and cross-country skiing. 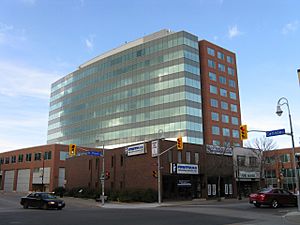 The Garden City Tower is the Ministry of Transportation headquarters, with downtown transit terminal at ground level.

The most defining transportation icon of St. Catharines is the Welland Canal, a ship canal that runs 43.4 kilometres (27.0 mi), passing through the city. Four of its locks are within city boundaries. The canal allows shipping vessels to traverse the 99.5-metre (326.5 ft) drop in altitude from Lake Erie to Lake Ontario.

The main access routes into and out of St. Catharines are served by two major freeways. The Queen Elizabeth Way runs east (at 15-Mile Creek) to west (at Garden City Skyway) and Highway 406 runs north (at QEW) to south (at St. David's Road). Prior to the construction of these freeways, St. Paul Street (former Highway 8, now Regional Road 81) and Hartzel Road (former Highway 58, now a city-maintained street) provided east–west and north–south access to the city.

Public transportation is served by the St. Catharines Transit Commission, which operates bus routes throughout the city and neighbouring Thorold. All major routes converge at the St. Catharines Bus Terminal, which is downtown within the headquarters of the Ontario Ministry of Transportation. The central station is also served by Coach Canada, with service to Toronto and Niagara Falls.

Though transportation by rail is becoming increasingly popular, the St. Catharines train station is largely under-utilized, with car and bus travel being the dominant forms of transportation for the city. The station is in its original building, outside the downtown core (because of issues involving the crossing of 12-Mile Creek). It is served daily by Via Rail and Amtrak trains connecting it to Toronto and New York City. The provincial and federal government recently committed $385 million each to GO Transit to aid in the development of their 10-Year Capital Expansion Plan, which includes an expansion bus line servicing the Niagara Region. Currently, regular GO Bus service exists to St. Catharines with a stop at Fairview Mall, allowing riders to travel either west toward Burlington or east toward Niagara Falls. A rail link with GO Transit operates during the summer months with plans for the city to be permanently linked via rail in the future.

St. Catharines had one of the first interurban electric streetcar routes, which ran between the city and Merritton and was eventually extended to Port Dalhousie in the north and Thorold to the south. Like most streetcar routes throughout the world, it was decommissioned in the 1960s, and the right-of-way has since been converted to parks and trails.

All content from Kiddle encyclopedia articles (including the article images and facts) can be freely used under Attribution-ShareAlike license, unless stated otherwise. Cite this article:
St. Catharines Facts for Kids. Kiddle Encyclopedia.