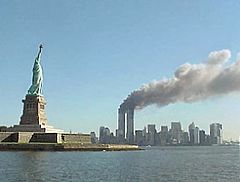 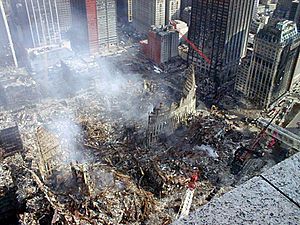 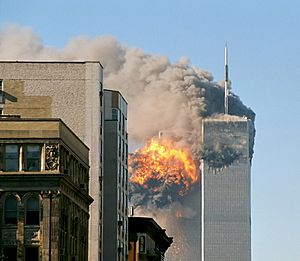 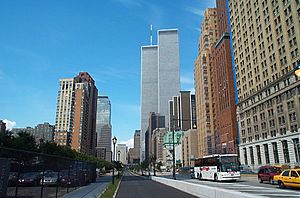 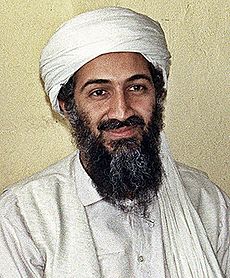 Main page: Memorials and services for the September 11 attacks

The Tribute in Light on September 11, 2006, the fifth anniversary of the attacks

In the days immediately following the attacks, many memorials and vigils were held around the world, and photographs of the dead and missing were posted around Ground Zero. A witness described being unable to "get away from faces of innocent victims who were killed. Their pictures are everywhere, on phone booths, street lights, walls of subway stations. Everything reminded me of a huge funeral, people quiet and sad, but also very nice. Before, New York gave me a cold feeling; now people were reaching out to help each other."

One of the first memorials was the Tribute in Light, an installation of 88 searchlights at the footprints of the World Trade Center towers. In New York City, the World Trade Center Site Memorial Competition was held to design an appropriate memorial on the site. The winning design, Reflecting Absence, was selected in August 2006, and consists of a pair of reflecting pools in the footprints of the towers, surrounded by a list of the victims' names in an underground memorial space. The memorial was completed on September 11, 2011; a museum also opened on site on May 21, 2014.

The Sphere by the German sculptor Fritz Koenig is the world's largest bronze sculpture of modern times, and stood between the Twin Towers on the Austin J. Tobin Plaza of the World Trade Center in New York City from 1971 until the terrorist attacks on September 11, 2001. The sculpture, weighing more than 20 tons, was the only remaining work of art to be recovered largely intact from the ruins of the collapsed Twin Towers after the attacks. Since then, the work of art, known in the USA as The Sphere, has been transformed into an important symbolic monument of 9/11 commemoration. After being dismantled and stored near a hangar at John F. Kennedy International Airport, the sculpture was the subject of the 2001 documentary Koenig's Sphere by filmmaker Percy Adlon. On August 16, 2017, the work was reinstated, installed at the Liberty Park close to the new World Trade Center arial and the 9/11 Memorial.

In Arlington County, the Pentagon Memorial was completed and opened to the public on the seventh anniversary of the attacks in 2008. It consists of a landscaped park with 184 benches facing the Pentagon. When the Pentagon was repaired in 2001–2002, a private chapel and indoor memorial were included, located at the spot where Flight 77 crashed into the building.

In Shanksville, a concrete-and-glass visitor center was opened on September 10, 2015, situated on a hill overlooking the crash site and the white marble Wall of Names. An observation platform at the visitor center and the white marble wall are both aligned beneath the path of Flight 93. A temporary memorial is located 500 yards (457 m) from the crash site. New York City firefighters donated a cross made of steel from the World Trade Center and mounted on top of a platform shaped like the Pentagon. It was installed outside the firehouse on August 25, 2008. Many other permanent memorials are elsewhere. Scholarships and charities have been established by the victims' families and by many other organizations and private figures.

On every anniversary in New York City, the names of the victims who died there are read out against a background of somber music. The President of the United States attends a memorial service at the Pentagon, and asks Americans to observe Patriot Day with a moment of silence. Smaller services are held in Shanksville, Pennsylvania, which are usually attended by the First lady.