Shanksville is a borough in Somerset County, Pennsylvania, United States, with a population of 237, as of the 2010 census. It is part of the Somerset, Pennsylvania Metropolitan Statistical Area and is approximately 75 miles southeast of Pittsburgh and 226 miles southwest of Philadelphia. The mayor of Shanksville is Matt McDermott.

Shanksville has the seventh-highest elevation of boroughs in Pennsylvania, at 2,230 feet (680 m). 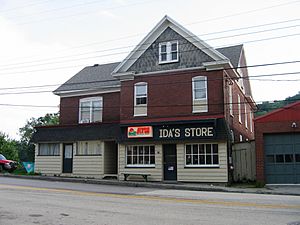 There were 96 households, out of which 32.3% had children under the age of 18 living with them, 54.2% were married couples living together, 12.5% had a female householder with no husband present, and 28.1% were non-families. 22.9% of all households were made up of individuals, and 9.4% had someone living alone who was 65 years of age or older. The average household size was 2.55 and the average family size was 3.06.

Christian Shank, a German immigrant, built a cabin on Stony Creek in 1798, later building a grist mill and two saw mills in the vicinity. Emmanuel Shaffer opened a store at the site in 1828, and the following year Shank laid out the town of Shanksville. The Shanksville post office was opened in 1874. Shanksville was incorporated as a borough on January 25, 1913. 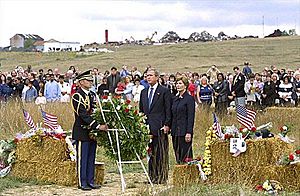 On September 11, 2001, during the terrorist attacks on the United States, Shanksville received worldwide attention after United Airlines Flight 93 crashed into a field in Stonycreek Township, 1.75 miles (2.82 km) north of the town of Shanksville, killing all 40 civilians and four hijackers on board. The hijackers had intended to fly the plane to Washington, D.C. and crash it into either the Capitol or the White House. However, after learning from family members via airphone of the earlier attacks on the World Trade Center and The Pentagon, the passengers on board revolted against the hijackers and fought for control of the plane, causing it to crash. It was the only one of the four aircraft hijacked that day that never reached its intended target.

There are two memorials to the event. The original, temporary Flight 93 National Memorial to the passengers and crew of Flight 93 was located on a hill, about 500 yards (460 m) from the crash site. On July 8, 2010, a new temporary entrance and memorial were opened at an area called "the Western Overlook". It is where the FBI set up their command center and where family members first saw the aftermath of the crash, bringing their own memorials, and where visitors can leave them today. The initial phase of permanent construction of the Flight 93 National Memorial, including the visitor's center, was completed by the 10th anniversary in 2011. The memorial is built around the crash site, following the plane's flight path, and protecting the area of impact, known as the "Sacred Ground", which remains protected and accessible only to family members of the passengers and crew.

Shanksville's volunteer firefighters, as well as emergency personnel from nearby towns of Central City, Somerset, and others, had rushed to the United Airlines Flight 93 crash scene to search for survivors. Members of the New York City Fire Department donated to the Shanksville Volunteer Fire Department a cross-shaped piece of steel salvaged from the World Trade Center. Mounted atop a Pentagon-shaped base, it was installed outside the firehouse and dedicated on August 24, 2008.

All content from Kiddle encyclopedia articles (including the article images and facts) can be freely used under Attribution-ShareAlike license, unless stated otherwise. Cite this article:
Shanksville, Pennsylvania Facts for Kids. Kiddle Encyclopedia.