Kids Encyclopedia Facts
This page is about the Pennsylvania borough. For other uses, see Somerset, Pennsylvania (disambiguation).

Somerset is a borough in Somerset County, Pennsylvania, United States. The population was 6,277 at the 2010 census. The borough is surrounded by Somerset Township. It is the county seat of Somerset County. Somerset is just off Exit 110 of the Pennsylvania Turnpike (I-70 and I-76). Somerset is the principal city of the Somerset, PA Micropolitan Statistical Area, and is also one of two cities, the other being Johnstown, that make up the larger Johnstown-Somerset, PA Combined Statistical Area.

The Somerset County Courthouse and Uptown Somerset Historic District are listed on the National Register of Historic Places.

According to the United States Census Bureau, the borough has a total area of 2.7 square miles (7.0 km2), all of it land.

Somerset has the ninth-highest elevation of towns in Pennsylvania, at 2,190 feet (670 m) above sea level.

Somerset has a humid continental climate that is affected by the high elevation, rendering them colder much of the winter than Altoona, Johnstown, or State College, despite being well south of either location and quite similar to those seen in northern Pennsylvania, although the average winter high temperatures are a bit higher. Somerset holds the June and November record lows for the state of Pennsylvania. Somerset is also the only place in Pennsylvania to receive accumulations of snow in June (other places received a partial dusting at most) when they received 3 inches of snow from the same polar front that caused them to drop to 20 degrees on June 10, 1913, and due to the arctic air, it was powdery snow that was photographed being swept off porches with brooms. That same cold snap brought snow to many other Pennsylvania communities, especially in the northern counties. 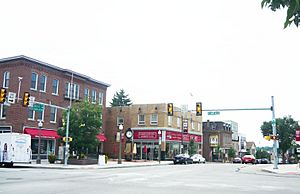 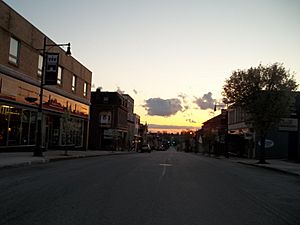 Easter Sunset From The Diamond

There were 3,035 households out of which 26.4% had children under the age of 18 living with them, 40.5% were married couples living together, 12.6% had a female householder with no husband present, and 43.4% were non-families. 38.6% of all households were made up of individuals and 17.6% had someone living alone who was 65 years of age or older. The average household size was 2.12 and the average family size was 2.82.

All content from Kiddle encyclopedia articles (including the article images and facts) can be freely used under Attribution-ShareAlike license, unless stated otherwise. Cite this article:
Somerset, Pennsylvania Facts for Kids. Kiddle Encyclopedia.