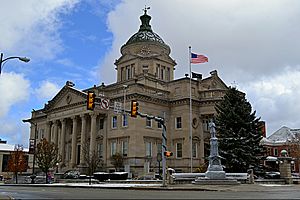 Somerset County is a county located in the U.S. state of Pennsylvania. As of the 2010 census, the population was 77,742. Its county seat is Somerset. The county was created on April 17, 1795, from part of Bedford County and named after Somerset, United Kingdom.

George Washington passed through the area of Somerset County in 1753 on a scouting expedition at the beginning of the French-Indian War. The Forbes Road cuts through Somerset County. This 200-mile stretch from Carlisle to what is now Pittsburgh was created by Brigadier General John Forbes in the British Expedition of 1758 to Fort Duquesne. Forbes Ford was one of two great western land routes cut through the wilderness to create supply lines from the east. It was later the primary route of pioneers travelling to Ohio Country.

Fur trappers and hunters were first to stay in the region. The earliest permanent white settlement in what is now Somerset County is a region known as Turkeyfoot. People of "The Jersey Settlement" emigrated from Essex and Morris Counties, New Jersey about 1770.

Somerset County gained worldwide attention in 2001 when a hijacked airliner, United Airlines Flight 93, crashed in Stonycreek Township, near the town of Shanksville as part of the September 11 Terrorist Attacks. The first confirmed report of the plane's crash came from Somerset County Airport as reported on NBC's The Today Show. The most likely target of this flight was the U.S. Capitol in Washington, D.C. The terrorists' plans for this plane were thwarted by the actions of the passengers and crew. Their bravery is honored and the crash site, which is the final resting place of the passengers and crew, is now protected as part of the Flight 93 National Memorial, under the care of the National Park System. See also USS Somerset, a U.S. Navy warship which was named in commemoration of the Flight 93 tragedy.

In July 2002, Somerset County again made worldwide news when nine coal miners were rescued from several hundred feet underground at the Quecreek mine after an intense multi-day struggle.

According to the U.S. Census Bureau, the county has a total area of 1,081 square miles (2,800 km2), of which 1,074 square miles (2,780 km2) is land and 6.6 square miles (17 km2) (0.6%) is water. Somerset County is one of the far southern counties of Pennsylvania, along its straight southern edge. The county borders Garrett and Allegany Counties in Maryland, and the Pennsylvania counties of Fayette, Westmoreland, Cambria, and Bedford.

Somerset County along with Garrett County is one of the snowiest inhabited locations in the United States, with the highest elevations of the county averaging 150+ inches of snow each winter. The county's elevation and general proximity to both the Great Lakes and the Atlantic Ocean causes snow from both Nor'easters and lake effect upslope snow events to fall from late October through early April. Snow has been recorded in Somerset County in every month except July, although local lore has it that even July saw snow in 1816, "the year without a summer." Mount Davis, the highest natural point in the state of Pennsylvania at 3,213 feet (979 m), is located in the southern part of the County.

Somerset County is situated along the eastern border of the Allegheny Plateau physiographic province, which is characterized by gently folded to flat-lying sedimentary rocks of middle to late Paleozoic age. The eastern border of the county is approximately at the Allegheny Front, a geological boundary between the Allegheny Plateau and the Ridge and Valley Province (characterized by folded and faulted sedimentary rocks of early to middle Paleozoic age).

The stratigraphic record of sedimentary rocks within the county spans from the Devonian Scherr Formation to the Pennsylvanian Monongahela Formation. Most of these rocks are clastics (conglomerate, sandstone, shale), and there is little or no limestone exposed at the surface. No igneous or metamorphic rocks of any kind exist within the county.

Structurally, Somerset County has many gentle folds, the axes of which trend roughly north-northeast. Synclines include the Youghiogheny Syncline, New Lexington/Johnstown Syncline, Somerset Syncline, Berlin Syncline, and Wellersburg Syncline (called the George's Creek Syncline in Maryland). The southern end of Wilmore Syncline is at the town of Windber. Anticlines include the Laurel Hill Anticline, Centerville Dome, Boswell Dome, Negro Mountain Anticline, and an unnamed anticline between the Berlin and Wellersburg Synclines.

All of Somerset County lies far to the south of the glacial boundary, and thus it was never glaciated. However, during the Pleistocene epoch (the Ice Age), periglacial processes dominated. Most of the county was most likely a tundra during the Pleistocene. Patterned ground typical of tundra is still visible at Mount Davis, although it is somewhat obscured by vegetation.

The main drainages in southwestern Somerset county are the Casselman River and Laurel Hill Creek which flow into the Youghiogheny River along the southwest border. In the northwest, Stonycreek River, Shade Creek, and Quemahoning Creek (which flows into the Quemahoning Reservoir) are tributaries of the Conemaugh River. All these drainages are part of the Mississippi River Watershed. In the southeast, Wills Creek flows east into Bedford County and then into Maryland where it joins the Potomac River. Also, the headwaters of the Raystown Branch of the Juniata River are to the east of the town of Somerset. Both the Potomac and Juniata rivers are part of the Chesapeake Bay Watershed.

Coal fields exist within Somerset County. The coal is entirely bituminous, and much of it has been mined or is being mined by Strip mining. Most of the coal is within the Main Bituminous Field, which stretched north and west to adjacent counties and southward into Maryland and West Virginia. The rest is within the Georges Creek Field.

There are many abandoned mines in the county, and acid mine drainage is an environmental problem in many areas. Fishless streams exist as a result of the discharge from the abandoned mines. These include parts of the Casselman River, Shade Creek, Stonycreek River, and Quemahoning Creek, as well as many of their tributaries.

There are many small, deep natural gas fields in the northwestern part of the county. 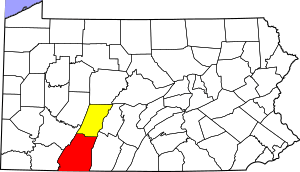 Laurel Arts is one of the few, full-service arts centers in rural Pennsylvania. Centered in Somerset borough, it serves all of Somerset County through two locations: one at the Philip Dressler Center for the Arts, and the second, an Education and Dance Center located in the Georgian Place. Founded in 1976, Laurel Arts is a 501(c)(3) that offers art classes, music lessons and dance classes, as well as hosting exhibits by local and regional artists throughout the year.

The Rockwood Opera House is located in Rockwood, Pennsylvania. The building is a historic landmark restored to reflect original design from 1890. Since reopening, Rockwood Opera House has hosted dinner theater since 2000. Productions vary from Tribute Artists of classic performers to community theater. 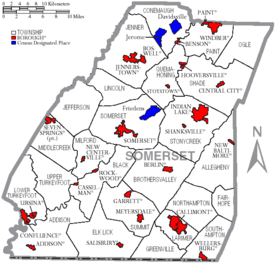 Under Pennsylvania law, there are four types of incorporated municipalities: cities, boroughs, townships, and, in at most two cases, towns. The following boroughs and townships are located in Somerset County:

The population ranking of the following table is based on the 2010 census of Somerset County.

All content from Kiddle encyclopedia articles (including the article images and facts) can be freely used under Attribution-ShareAlike license, unless stated otherwise. Cite this article:
Somerset County, Pennsylvania Facts for Kids. Kiddle Encyclopedia.