Allegany County is a county located in the northwestern part of the U.S. state of Maryland. As of the 2010 census, the population was 75,087. Its county seat is Cumberland. The name Allegany may come from a local Lenape word, welhik hane or oolikhanna, which means 'best flowing river of the hills' or 'beautiful stream'. A number of counties in the Appalachian region of the US are named Allegany, Allegheny, or Alleghany.

Allegany County is part of the Cumberland, MD-WV Metropolitan Statistical Area. It is a part of the Western Maryland "panhandle".

The western part of Maryland (including the present Allegany County) was originally part of Prince George's County when Maryland was formed in 1696. This county included six current counties, and by repeated splitting, new ones were generated: Frederick from Prince George's in 1748; and Montgomery and Washington from Frederick in 1776.

Allegany County is often referred to as "Where the South Begins."

Allegany County lies primarily in the Ridge-and-Valley Country of the Appalachian Mountains. It is bordered to the north by the Mason–Dixon line with Pennsylvania, to the south by the Potomac River and West Virginia, to the east by Sideling Hill Creek and Washington County, Maryland, and to the west by a land border with Garrett County, Maryland. The western part of the county contains a portion of the steep Allegheny Front, which marks the transition to the higher-elevation Appalachian Plateau and Allegheny Mountain region. The town of Frostburg is located west of the Front at an elevation of nearly 2,100 feet above sea level, while the county seat of Cumberland, only eight miles away, has an elevation of only 627 feet.

The primary mineral resources extracted for use in Allegany County are coal, iron, sandstone, and limestone. Coal bearing formations are concentrated in the Georges Creek Basin in the western part of the county. 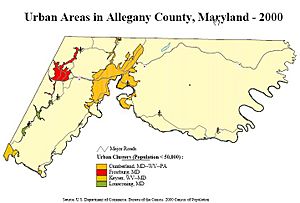 Other census-designated places in the county include:

All content from Kiddle encyclopedia articles (including the article images and facts) can be freely used under Attribution-ShareAlike license, unless stated otherwise. Cite this article:
Allegany County, Maryland Facts for Kids. Kiddle Encyclopedia.