Lonaconing is a town in Allegany County, Maryland, United States, located along the Georges Creek Valley. It is part of the Cumberland, MD-WV Metropolitan Statistical Area. The population was 1,214 at the 2010 census.

The first non-Native American settlers in the late 18th century were explorers, hunters and farmers. Names of some of the first settlers were Dye, Duckworth, Green, Fazenbaker, Grove, VanBuskirk, Knapp and Miller. The first stone house built in 1790 in Knapps Meadow just north of Lonaconing was owned by Samuel VanBuskirk. The house still stands and is a private residence as of 2016. The Lonaconing Historic District was listed on the National Register of Historic Places in 1983. Lonaconing is the birthplace of Baseball Hall of Fame pitcher Robert Moses ("Lefty") Grove, (1900-1975), who played notably for the old Baltimore Orioles, 1920-1925, during their famous string of six straight championships in the "Triple A" (AAA) minor league level of the International League, and later for Connie Mack's Philadelphia Athletics, (1925-1933) and the Boston Red Sox, 1934-1941, of the American League. His "Most Valuable Player" Award is the only one not on display at the National Baseball Hall of Fame in Cooperstown, New York, but at the George's Creek Library of the Western Maryland Regional Library system.

Iron and coal companies in Lonaconing built railroads in the 1840s, in anticipation of connecting with the Baltimore and Ohio Railroad (B&O) and the Chesapeake and Ohio Canal. Some of these mining companies owned and operated their own railroad equipment. The Georges Creek Rail Road was built south from Lonaconing to connect with the Baltimore & Ohio at Piedmont(VA) All of the rail lines were absorbed into the Cumberland and Pennsylvania Railroad (C&P) by 1870.

The Georges Creek Coal and Iron Company constructed and operated a blast furnace in Lonaconing from 1836 to 1855 along with constructing and operating the related Georges Creek Railroad from 1851 to 1863. The Lonaconing Furnace was listed on the National Register of Historic Places in 1973.

There were 463 households, of which 30.9% had children under the age of 18 living with them, 47.3% were married couples living together, 13.4% had a female householder with no husband present, 4.8% had a male householder with no wife present, and 34.6% were non-families. 31.1% of all households were made up of individuals, and 15.6% had someone living alone who was 65 years of age or older. The average household size was 2.48 and the average family size was 3.08.

According to the United States Census Bureau, the town has a total area of 0.41 square miles (1.06 km2), all of it land. 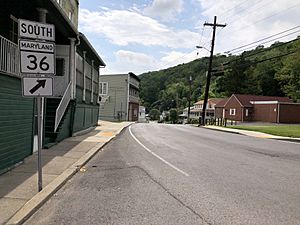 The main method of travel to and from Lonaconing is by road. The only significant highway serving the town is Maryland Route 36, which also serves as Main Street. MD 36 heads northward towards Frostburg and Interstate 68, while to the south, it terminates at the town of Westernport.

Ruth Bear Levy (1898-1994), painter and writer, who published a memoir -- using her oil paintings as illustrations -- entitled "A Wee Bit O' Scotland: Growing Up in Lonaconing at the Turn of the Century." Also, she authored a two-part article, "Recollections of Lefty Grove: Baseball's Greatest Left-Handed Pitcher," for the Maryland Historical Magazine.

All content from Kiddle encyclopedia articles (including the article images and facts) can be freely used under Attribution-ShareAlike license, unless stated otherwise. Cite this article:
Lonaconing, Maryland Facts for Kids. Kiddle Encyclopedia.