Westernport is a town in Allegany County, Maryland, United States, along the Georges Creek Valley. It is part of the Cumberland, MD-WV Metropolitan Statistical Area. The population was 1,888 at the 2010 census. 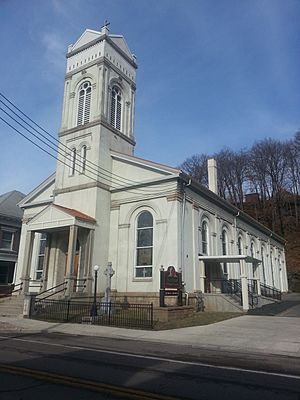 Westernport's first settlement is identified on a French military map dating from 1758. The map is currently on display at École Militaire in Paris. The settlement at that time had no name. By 1774, it was known as Hardscrabble because the rocky soil made planting difficult. Some time in the mid-1790s, the name was changed to Westernport, with the town being the western-most navigable port on the Potomac River. In the late 18th century and early to mid part of the 19th century, coal and timber was loaded onto flatboats where George's Creek empties into the Potomac, then floated down to near Great Falls, Virginia, where the goods were unloaded, the boats broken up to sell as lumber, and the operators walking back to Westernport. The town was incorporated in 1859.

In 1886–87 the Piedmont and Cumberland Railway was built through Westernport, connecting the town to Cumberland, Maryland.

The Waverly Street Bridge was listed on the National Register of Historic Places in 1984. The Meyer Site was listed in 1973. 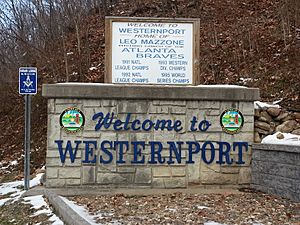 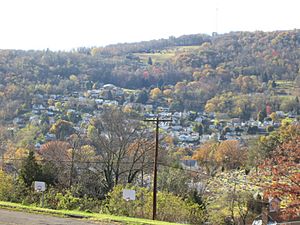 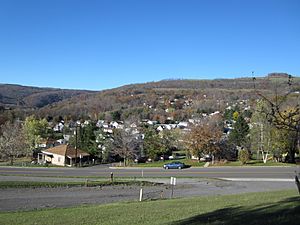 The climate in this area has mild differences between highs and lows, and there is adequate rainfall year round. According to the Köppen Climate Classification system, Westernport has a marine west coast climate, abbreviated "Cfb" on climate maps.

There were 810 households, of which 27.0% had children under the age of 18 living with them, 50.0% were married couples living together, 9.9% had a female householder with no husband present, 5.8% had a male householder with no wife present, and 34.3% were non-families. 31.5% of all households were made up of individuals, and 16.6% had someone living alone who was 65 years of age or older. The average household size was 2.33 and the average family size was 2.88. 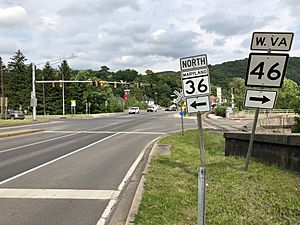 The junction of MD 36 and MD 135 in Westernport

The primary means of travel to and from Westernport are by road. The main highways serving the town are Maryland Route 36 and Maryland Route 135. To the south, MD 36 connects the town to West Virginia Route 46 on the other side of the North Branch Potomac River in Piedmont, while heading north, MD 36 passes Interstate 68 on its way to Frostburg. MD 135 connects eastward to U.S. Route 220 just north of Keyser. To the west, MD 135 eventually reaches U.S. Route 219 in Oakland. Within the town limits, Maryland Route 937 also serves locals, having formerly been the alignment of MD 36.

All content from Kiddle encyclopedia articles (including the article images and facts) can be freely used under Attribution-ShareAlike license, unless stated otherwise. Cite this article:
Westernport, Maryland Facts for Kids. Kiddle Encyclopedia.