Oakland is situated only miles from the source of the Potomac River, which flows directly into Chesapeake Bay. It is also near the Wisp Resort at Deep Creek Lake, a major ski resort for many Marylanders and other visitors.

Oakland was formally incorporated as a town in 1862.

The town is home to a historic B&O railroad station, which was listed on the National Register of Historic Places in 1973, and restored in the 2000s. Trains still run on the rail tracks behind the station, but it is mainly used for special organizations or gatherings at present. A gift shop is located within the station. In front of the station, there are a plethora of festivities that go on, mainly seasonal activities such as housing the town Christmas tree, decorating the plaza for a holiday, and sometimes parties.

Main Street of Oakland consists mainly of historic two to four story edifices that house the main shopping facilities in the area, such as a theatre, museum, book store, a local pharmacy, antique shops, clothing stores and banks. Many of the homes and businesses in the downtown area are examples of Victorian architecture. Much of the central section of Oakland is part of the Oakland Historic District, listed on the National Register of Historic Places in 1984. Also listed on the National Register are the Garrett County Courthouse and Hoye Site.

In the late 19th century and early 20th century, a large hotel named the Oakland Hotel was located near the downtown railroad station. It was constructed in 1878 by the B&O Railroad. The hotel was a major tourist attraction for that time period until it was torn down in the early 20th Century.

According weather data tallied between July 1, 1985 and June 30, 2015 for every location in the National Oceanic and Atmospheric Administration's official climate database, Oakland, Maryland, is the snowiest place in the state of Maryland with an average of 105.9 inches of snow per year.

There were 875 households, of which 23.1% had children under the age of 18 living with them, 40.1% were married couples living together, 10.5% had a female householder with no husband present, 3.1% had a male householder with no wife present, and 46.3% were non-families. 40.5% of all households were made up of individuals, and 16.6% had someone living alone who was 65 years of age or older. The average household size was 2.03 and the average family size was 2.73.

The Oakland post office is home to a Depression-era mural, Buckwheat Harvest, painted by American artist Robert F. Gates. Gates was funded by the Treasury Section of Fine Arts to complete the mural as part of President Franklin Roosevelt's New Deal. Gates was probably inspired by Garrett County's strong tradition of growing buckwheat. 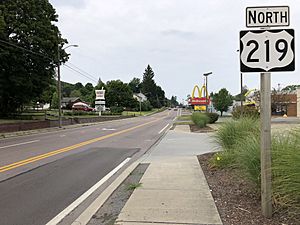 US 219 northbound in Oakland

All content from Kiddle encyclopedia articles (including the article images and facts) can be freely used under Attribution-ShareAlike license, unless stated otherwise. Cite this article:
Oakland, Maryland Facts for Kids. Kiddle Encyclopedia.