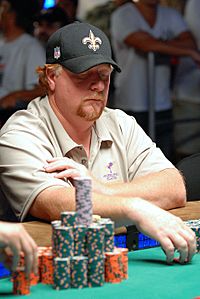 Moon, who taught himself how to play poker, ran a small logging company in the Maryland Panhandle before earning a 2009 World Series seat by winning a $130 satellite tournament. He was born in Oakland, Maryland.

All content from Kiddle encyclopedia articles (including the article images and facts) can be freely used under Attribution-ShareAlike license, unless stated otherwise. Cite this article:
Darvin Moon Facts for Kids. Kiddle Encyclopedia.