Ledyard is a Town in New London County, Connecticut, United States, located along the Thames River. The town is named after Colonel William Ledyard, a Revolutionary War officer who was killed at the Battle of Groton Heights. The population was 15,051 at the 2010 census. The Foxwoods Resort Casino, owned and operated by the Mashantucket Pequot Tribe, is located in the northeastern section of Ledyard, on the reservation owned by the tribe.

Ledyard's zip code is 06339. Within the southwestern area of Ledyard is the district known as Gales Ferry, which has the postal code 06335. 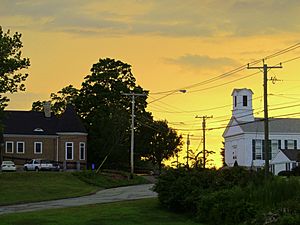 Bill Library and the Ledyard Congregational Church in Ledyard Center

According to the United States Census Bureau, the town has a total area of 40.0 square miles (104 km2), of which 38.1 square miles (99 km2) is land and 1.9 square miles (4.9 km2), or 4.62%, is water. Ledyard is situated north of Groton, and borders the east bank of the Thames River in southeastern Connecticut. The northern half of the Naval Submarine Base New London is located in the southwest corner of the town.

Ledyard is among the areas of the United States that was covered by a continental ice sheet during the last Ice Age. Therefore, Ledyard has its share of interesting glacial geology. The glaciers that covered Ledyard carried the many large boulders that litter the town. The town has set aside land designated as a "Glacial Park" which consists of a section of end moraine and outwash deposits (containing kettles). This area encompasses a segment of the "Ledyard Moraine"—a clast-supported boulder deposit that is anomalous in nature.

There were 5,286 households, out of which 39.6% had children under the age of 18 living with them, 65.2% were married couples living together, 9.4% had a female householder with no husband present, and 22.4% were non-families. 16.4% of all households were made up of individuals, and 5.1% had someone living alone who was 65 years of age or older. The average household size was 2.78 and the average family size was 3.12.

The ages of Ledyard's population were spread out, with:

All content from Kiddle encyclopedia articles (including the article images and facts) can be freely used under Attribution-ShareAlike license, unless stated otherwise. Cite this article:
Ledyard, Connecticut Facts for Kids. Kiddle Encyclopedia.