New London County contains reservations of four of the five state-recognized Indian tribes, although the Paugassett were historically located farther west. The population was 274,055 as of the 2010 census.

Southeastern New England was dominated by the Pequot people at the time of English colonization. They spoke the Mohegan-Pequot language and were one of the Algonquian-speaking tribes in the coastal areas. After years of conflict, the English and their Indian allies killed many and disrupted the Pequots in the Pequot War of 1637, ending their dominance. Two descendant Pequot tribes are recognized by the state today, as are three other tribes, all descended from Algonquian peoples.

New London County was one of four original counties in Connecticut that were established on May 10, 1666 by an act of the Connecticut General Court. The act establishing the county states:

This Court orders that from the Paukatuck River wth
Norridge to ye west bounds of Homonoscet Plantation shalbe
for future one County, wch County is called the County of
N: London. And it is ordered that the County Court shalbe
held at N. London the first Wednesday in June and the third
Thursday in Septemb[e]r yearly.

As established in 1666, New London County consisted of the towns of Stonington, Norwich, New London, and Saybrook. The "Homonoscet Plantation" referred to in the constituting Act was settled in March 1663, at first as Kenilworth but incorporated as the town of Killingworth in 1667. Several new towns were incorporated and added to New London over the next few decades: Preston in 1687, Colchester in 1699, and Lebanon in 1700. The settlements along the Quinebaug Valley were placed under New London jurisdiction in 1697 (later incorporated as Plainfield in 1699). By 1717, more towns were established in northeastern Connecticut (between the Quinebaug Valley and the Rhode Island border) and added to New London County.

Windham County was constituted from Hartford and New London counties on 12 May 1726, consisting of towns in northeastern Connecticut. New London County lost the towns of Voluntown, Pomfret, Killingly, Canterbury, Plainfield, and Lebanon to the newly formed county. In 1785, Middlesex County was constituted, consisting of towns along the lower Connecticut River Valley, taking away the towns of Killingworth and Saybrook from New London County. Several additional boundary adjustments took place in the 19th century: the establishment of the town of Marlborough in 1803, the transfer of the town of Lebanon from Windham County in 1824, and the transfer of the town of Voluntown from Windham County in 1881.

The terrain of the county is mostly level, becoming more elevated only in its northern extreme. The highest point in the county is Gates Hill in the Town of Lebanon at approximately 660 feet (201 m) above sea level, and the lowest point is sea level. 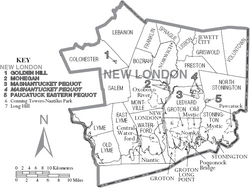 Villages are named localities within towns, but have no separate corporate existence from the towns they are in.

All content from Kiddle encyclopedia articles (including the article images and facts) can be freely used under Attribution-ShareAlike license, unless stated otherwise. Cite this article:
New London County, Connecticut Facts for Kids. Kiddle Encyclopedia.