Kids Encyclopedia Facts
Not to be confused with Norwich, Norfolk or Norwalk, Connecticut.

Norwich (also called "The Rose of New England") is a city in New London County, Connecticut, United States. The Yantic, Shetucket, and Quinebaug Rivers flow into the city and form its harbor, from which the Thames River flows south to Long Island Sound. The population was 40,125 at the 2020 United States Census. 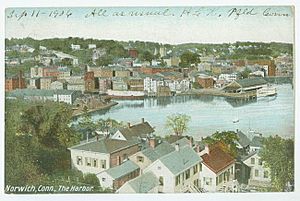 Norwichtown was founded in 1659, by settlers from Old Saybrook led by Major John Mason and Reverend James Fitch. They purchased the land "nine miles square" that would become Norwich from the local Native Mohegan Sachem Uncas. In 1668, a wharf was established at Yantic Cove. Settlement was primarily in the three-mile (5-km) area around the Norwichtown Green. The 69 founding families soon divided up the land in the Norwichtown vicinity for farms and businesses.

By 1694, the public landing built at the head of the Thames River allowed ships to offload goods at the harbor; the harbor area is known as the Chelsea neighborhood. The distance between the port and Norwichtown was serviced by the East and West Roads, which later became Washington Street and Broadway.

The original center of the town was a neighborhood now called Norwichtown, an inland location chosen to be the center of a primarily agricultural farming community. By the latter 18th century, shipping at the harbor began to become far more important than farming, especially when industrial mills began manufacturing on the three smaller rivers.

By the early 19th century, the center of Norwich had effectively moved to the Chelsea neighborhood. The official buildings of the city were located in the harbor area, such as the City Hall, courts, and post office, and all the large 19th-century urban blocks. The former center is now called Norwichtown to distinguish it from the current city.

Norwich merchants were shipping goods directly from England, but the Stamp Act of 1764 forced Norwich to become more self-sufficient. Soon large mills and factories sprang up at the falls on the rivers which traverse the town. The ship captains of Norwich and New London who were skillful at avoiding Imperial taxation during peacetime later were just as successful eluding warships during war.

During the American Revolution Norwich supported the cause for independence by supplying soldiers, ships, and munitions. Norwich was also a center for activity for the Sons of Liberty.

One of the most notable figures of the Revolution, Benedict Arnold, was born in Norwich. Other Colonial era noteworthies include Samuel Huntington, Christopher Leffingwell, and Daniel Lathrop.

Regular steamship service between New York and Boston helped Norwich to prosper as a shipping center through the early part of the 19th century. During the Civil War, Norwich once again rallied and saw the growth of its textile, armaments, and specialty item manufacturing. This was also spurred by the building of the Norwich and Worcester Railroad in 1832–1837 bringing goods and people both in and out of Norwich. By the 1870s the Springfield and New London Railroad was also running trains through Norwich.

Twenty-nine percent of households had children under the age of 18 living with them, 40.7% were married couples living together, 15.0% had a female householder with no husband present, and 39.9% were non-families. Thirty-two percent of all households were made up of individuals, and 12.5% had someone living alone who was 65 years of age or older. The average household size was 2.34 and the average family size was 2.96.

The 2012 median income for a household in the city was $51,300. Fifteen percent of the population were below the poverty line. 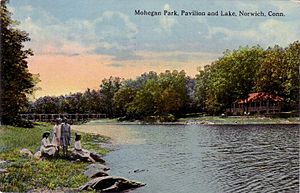 This forested area is Norwich's largest park. The park's property contains numerous hiking and biking trails, picnic tables, grills, pavilions for rent, a beach, basketball courts, a Mohegan monument, fountain and playgrounds. The Rose Garden at the entrance on Judd Road contains over a hundred varieties of roses and is a popular site for weddings. Many of the hiking trails are used by the Norwich Free Academy cross country team for practices, and in 2006 the team volunteered to improve the condition of trails. 5K "fun runs" are held in the park on Thursdays during the summer. As of 2009, the running course has been redesigned to incorporate much of the trails.

The Park Center contains Spaulding Pond, the square, fountain and Mohegan monument, both playgrounds and a dog pound run by the Norwich Police Department. The Park Center has declined somewhat. The zoo, reptile house, and concession stand have been closed for over a decade. However, much has been done to improve the appearance of the remaining park.

Spaulding Pond, the main body of water in Mohegan Park, is held back by an earthworks dam, across which is a path bordered by pergulas and flowering plants. On March 6, 1963, long term saturation of the over 100 year old earthen content, along with unchecked shrub and tree growth, severely weakened the structural content of the dam and caused the waters of Spaulding Pond to burst forth into the city, causing the Great Flood of Norwich, elegantly chronicled in Thomas Moody Jr's "A Swift and Deadly Maelstrom; The Great Norwich Flood of 1963." The break and subsequent flood flow swamped houses, streets, cars and caused an explosion which claimed the lives of six mill workers, as well as over six million dollars in damage. Mohegan Park also contains another, smaller pond, called The Skating Pond which is southeast of the main pond. This pond, which had always been an overflow spillway for Spaulding Pond and, when frozen in the winter provided a wonderful ice skating area for the local youth, thus its sobriquet, was re-designed as part of Norwich's long term flood plan in 1968 and currently serves as a surge overflow volume for the upgraded Spaulding Pond Dam. This pond is no longer open to public use however.

Because of its ample, sprawling trails and variety of flora and fauna, Mohegan Park is a lesser-known destination for Southeastern Connecticut's nature photographers.

The Slater Memorial Museum, located on the campus of the Norwich Free Academy, is named for John Fox Slater (1815−1884), corporator of The Norwich Free Academy for twenty years. The museum has grown to include the "Art of Five Continents"—North and South America, Europe, Asia, and Africa. Of particular interest are the Vanderpoel Collection of Asian Art, the Paul Zimmerman Collection of African and Oceanic Art, and a collection of American 19th-century paintings.

The AA Eastern League Connecticut Defenders, previously the Norwich Navigators, were a farm team of the San Francisco Giants and they played at Senator Thomas J. Dodd Memorial Stadium from both's inception in 1995 until the team announced its move to Richmond, Virginia for the 2010 season, where they are now known as the Richmond Flying Squirrels. However, starting in 2010, Dodd Stadium became the home to the Connecticut Tigers (formerly the Oneonta Tigers, now named Norwich Sea Unicorns) in the Class-A short-season New York–Penn League. The ESPN mini-series The Bronx Is Burning was filmed at Dodd Stadium.

Elementary and middle school residents are zoned to Norwich Public Schools. The middle schools of Norwich are Teachers' Memorial Global Studies Middle School and Kelly STEAM Magnet Middle School. Norwich is also home to the Integrated Day Charter School, an alternative to the area of public schools. Despite Norwich Public Schools serving the district, since 2007 NPS has not operated a high school after Norwich High School was closed and repurposed.

The Norwich Free Academy is the primary high school for students living in Norwich and several surrounding towns, including Bozrah, Canterbury, Franklin, Lisbon, Preston, Sprague, and Voluntown. The Norwich Free Academy was incorporated in 1855 by an act of the Connecticut Legislature, and operates as a privately endowed independent school governed by its Board of Trustees and funded by private, municipal, and state sources. In 2006, Sidney Frank donated $12 million to the Norwich Free Academy which resulted in the campus's newest building being named after him: the Sidney E. Frank Center for Visual and Performing Arts.

Norwich Technical High School, A Connecticut Technical High School System School, also serves the area. This school is a public option to those within the Norwich area, and many other towns surrounding Norwich. To those within the Norwich area, transportation is provided by Norwich Public Schools via the same buses that serve Norwich Free Academy in the morning, and in the afternoon students are transported to Norwich Free Academy to use their buses to return home. 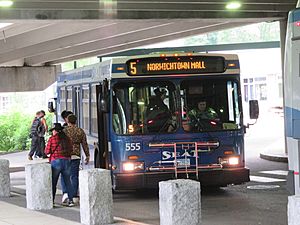 Historically, the city held a railroad stop at its downtown station, which is now in use as an office for The Norwich Bulletin. In the past, the city was served by the Norwich and Worcester Railroad, which today is still operated as a freight railroad, the Connecticut Southern Railroad.

The nearest passenger rail station to Norwich is New London Union Station in New London, CT. The nearest options for air travel are Bradley International Airport in Windsor Locks, CT, and Rhode Island T. F. Green International Airport in Providence, RI. Both of which are located 55–65 minutes away by vehicle. Up until the mid 00's, there was a closer airport with commercial air service, Groton-New London Airport.

In recent years, there have been discussions and proposals involving restoring passenger rail service to Norwich using the existing freight lines, providing service from New London, CT, through Norwich up to Brattleboro, VT. The most recent and ongoing proposal is the Central Corridor Rail Line.

All content from Kiddle encyclopedia articles (including the article images and facts) can be freely used under Attribution-ShareAlike license, unless stated otherwise. Cite this article:
Norwich, Connecticut Facts for Kids. Kiddle Encyclopedia.