Putnam is a town in Windham County, Connecticut, United States. The population was 9,224 at the 2020 census. 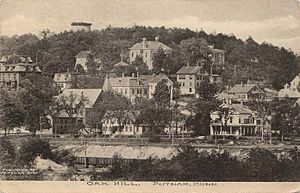 Putnam, originally known as Aspinock, then part of Killingly, is a New England mill town incorporated in 1855. Created from sections of Killingly, Pomfret, and Thompson, the town was named in honor of Revolutionary War General Israel Putnam.

Putnam was a key contributor in providing clothing and other goods to the Civil War soldiers. There were numerous mills and a train ran through the town, providing transportation for the goods being produced.

On August 19, 1955, Putnam was devastated by floods from torrential downpours caused by two hurricanes, which hit Connecticut within the span of a week. Hurricane Connie affected Connecticut on August 13, dropping between four and six inches (152 mm) of rain across the state. Hurricane Diane soaked the state with 14 inches (360 mm) of rain on August 18–19. The result was flooding in many of the state's rivers, including the Quinebaug River. The resulting torrent of water destroyed homes, businesses and factories. Floating magnesium barrels burst, lighting up the night. The railroad bed was washed away.

Toward the end of the twentieth century, the town took advantage of the empty mills and underutilized downtown commercial buildings to develop a large antique center. Antique shops line Main Street and other areas in town.

In 2006, the town made national news after an individual was shot twice by masked robbers while waiting in a group overnight outside a local Wal-Mart for the release of the PlayStation 3 video game console. The alleged perpetrators were apprehended.

Putnam was also the unlikely base of operations for the All-Russian Fascist Organization, a pre-war Russian emigre group that advocated fascism for the country under Anastasy Vonsyatsky.

According to the United States Census Bureau, the town has a total area of 20.4 square miles (52.8 km²), of which, 20.3 square miles (52.6 km²) are land and 0.1 square mile (0.3 km²) (0.54%) is water. The town is drained by the Quinebaug River, which runs north and south through the center of town. A tributary of the Quinebaug, the Five Mile River, runs north and south through East Putnam. Putnam has common boundaries with Thompson on the north (approx. 6 mi.), with Rhode Island on the east (approx. 2 mi.), with Killingly on the south (approx. 7 mi.) and with Pomfret and Woodstock on the west (approx. 4 mi.). 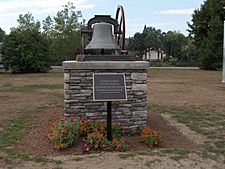 Putnam is served by the Northeastern Connecticut Transit District.

All content from Kiddle encyclopedia articles (including the article images and facts) can be freely used under Attribution-ShareAlike license, unless stated otherwise. Cite this article:
Putnam, Connecticut Facts for Kids. Kiddle Encyclopedia.