Killingly is a town in Windham County, Connecticut, United States. The population was 17,752 at the 2020 census. It consists of the borough of Danielson and the villages of Attawaugan, Ballouville, Dayville, East Killingly, Rogers, and South Killingly. 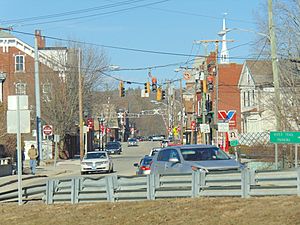 The borough of Danielson and the town of Killingly contain a small Laotian community. Both are on the nation's list of top 50 cities with the highest percentage of citizens claiming Laotian ancestry.

Danielson Airport is a state owned, public use airport located two nautical miles (4 km) northwest of the central business district of Danielson, a borough in Killingly.

Bus service to the area is provided by the Northeastern Connecticut Transit District.

All content from Kiddle encyclopedia articles (including the article images and facts) can be freely used under Attribution-ShareAlike license, unless stated otherwise. Cite this article:
Killingly, Connecticut Facts for Kids. Kiddle Encyclopedia.