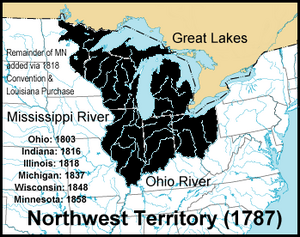 The Northwest Ordinance of 1787 said that the land north of the Ohio River and east of the Mississippi River would eventually become part of the United States. It encouraged people to move to the west. The Ordinance established policies for governing the territory and included laws eventually adopted in the Constitution. Included in the Ordinance were laws protecting freedom of religion (Article I), rights of the accused (Article II), public education and Indian land rights (Article III), admission of new states (Article V), and prohibition of slavery in the territory (Article VI). The territory included the future states of Ohio,Indiana, Illinois, Wisconsin, Michigan, and part of Minnesota. This was a very important part in the American history.

All content from Kiddle encyclopedia articles (including the article images and facts) can be freely used under Attribution-ShareAlike license, unless stated otherwise. Cite this article:
Northwest Ordinance Facts for Kids. Kiddle Encyclopedia.