Danielson is a borough in the town of Killingly in Windham County, Connecticut, United States. The population was 4,051 at the 2010 census.

Danielson was named for Gen. James Danielson, the builder of the first house in the settlement.

Danielson is the site of two historic districts listed on the National Register of Historic Places:

It additionally is home to the Temple Beth Israel synagogue, which was added to the National Register of Historic Places in 2003.Danielson is also home to the CT State Police barracks "D".

The borough of Danielson and the town of Killingly are home to a small Laotian community. Both Danielson and Killingly are on the nation's list of top 50 cities with the highest percentage of citizens claiming Laotian ancestry.The first Laotian family came to Danielson in September 1979. They were sponsored by a local couple, Daniel and Carolyn O'Leary. The O'Leary family proceeded to sponsor nearly 500 Laotian refugees over the next decade. 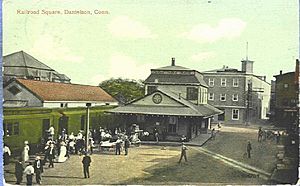 All content from Kiddle encyclopedia articles (including the article images and facts) can be freely used under Attribution-ShareAlike license, unless stated otherwise. Cite this article:
Danielson, Connecticut Facts for Kids. Kiddle Encyclopedia.