Thompson has the highest-banked race track (Thompson Speedway Motorsports Park, a 5/8 mile oval and a restored 1.7 mile road course) in New England. This speedway holds one of the biggest race programs in New England, The World Series of Auto Racing, where 16 divisions and about 400 cars show up each fall. Another claim to fame is that the Tri-State Marker is located just on the border of Thompson. The term "Swamp Yankee" is thought to have originated in Thompson during the American Revolution in 1776. In colonial times, the town was the site of an Indian village, known as Maanexit.

Thompson was the site of the Great East Thompson Train Wreck in 1891, one of the worst train wrecks in American history and the only one to involve four trains.

According to the United States Census Bureau, the town has a total area of 48.7 square miles (126 km2), of which 46.9 square miles (121 km2) is land and 1.7 square miles (4.4 km2), or 3.51%, is water. Thompson possesses many small ponds, such as Little Pond and Long Pond, as well as two principal lakes: West Thompson Lake and Quaddick Reservoir. Contained within its borders are several moderately sized rivers, including the French River, a tributary of the Quinebaug River, which also runs through Thompson. One of the highest points in Thompson and the surrounding villages is Fort Hill at 649 feet (198 m) above sea level.

A minor point of geological interest is the Wilsonville Fault, created during the breakup of Pangaea nearly 200 million years ago.

Thompson is composed of ten villages: 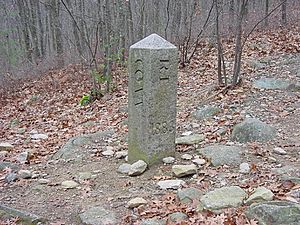 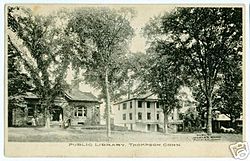 The library was started in 1902 with 1,370 books in a small building on Thompson Hill, now known as the Ellen Larned Memorial Library. Two branches were created, the Quinebaug Branch, in operation from 1961 to 1994, and the Grosvenordale Branch, in operation from 1958 to 1966. Thompson was the first small town in Connecticut to have a bookmobile service, operating from 1966 to 1993. The current library in North Grosvenordale was finished in 1994.

All content from Kiddle encyclopedia articles (including the article images and facts) can be freely used under Attribution-ShareAlike license, unless stated otherwise. Cite this article:
Thompson, Connecticut Facts for Kids. Kiddle Encyclopedia.