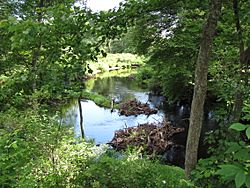 The French River is a river in south-central Massachusetts and northeastern Connecticut, USA.

The river rises near Leicester, Massachusetts, and flows generally southwards through Auburn, Oxford, and along the town line between Webster and Dudley; it then enters Connecticut where it joins the Quinebaug River at Thompson, just northeast of Putnam. The Quinebaug in turn flows into the Shetucket River and ultimately the Thames River to empty into the Long Island Sound.

French River was so named from a settlement of French Protestants in Oxford.

All content from Kiddle encyclopedia articles (including the article images and facts) can be freely used under Attribution-ShareAlike license, unless stated otherwise. Cite this article:
French River (Massachusetts) Facts for Kids. Kiddle Encyclopedia.