Kids Encyclopedia Facts
This page is about the town. For the census-designated place (CDP), see Webster (CDP), Massachusetts.

Webster is a town in Worcester County, Massachusetts, United States. The population was 16,767 at the 2010 census.

Webster was first settled in 1713 and was officially incorporated on March 6, 1832. The area forming the town had previously been divided among the town of Dudley, the town of Oxford and an unincorporated gore. The primary founder was the manufacturer Samuel Slater, who came to the area after his celebrated activities in Pawtucket, Rhode Island, and founded several textile mills, one of which was taken over by the Cranston Print Works in 1936. He named the town after his friend Daniel Webster. Slater spent his last years in Webster and died and is buried there in Mount Zion Cemetery.

The town is bounded on the north by Oxford; on the east by Douglas; on the south by Thompson, Connecticut, and on the west by Dudley, with which it is most closely tied culturally and politically.

The town is home to Lake Chaubunagungamaug, also known as "Webster Lake", a body of water with a surface area of 1,442 acres (584 ha). Lake Chargoggagoggmanchauggagoggchaubunagungamaugg, a 45-letter alternative name for this body of water, is often cited as the longest place name in the United States and one of the longest in the world. Today, "Webster Lake" may be the name most used, but some residents of Webster take pride in reeling off the longer versions.

The town is known for incorporating many Polish-American immigrants. Persons of Polish descent may constitute as much a third of the town's population. St. Joseph Basilica, the oldest Polish-American Catholic parish church in New England, is located in Webster. 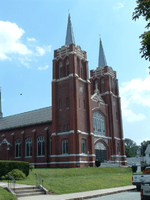 Chaubunagungamaug Reservation, a state-recognized Nipmuc Indian reservation, is located within the town. There are over 500 tribe members officially recognized by the Commonwealth of Massachusetts, but they are not recognized as a tribal government by the Bureau of Indian Affairs. 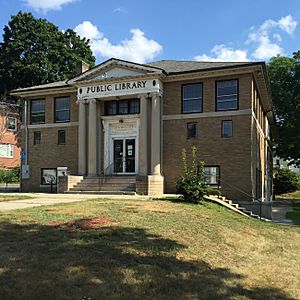 The Chester C. Corbin library was demolished in the fall of 2016, with its contents temporarily moved to the Webster Town Hall while a new building is built.

All content from Kiddle encyclopedia articles (including the article images and facts) can be freely used under Attribution-ShareAlike license, unless stated otherwise. Cite this article:
Webster, Massachusetts Facts for Kids. Kiddle Encyclopedia.