Pawtucket is a city in Providence County, Rhode Island, United States. The population was 75,604 at the 2020 census, making the city the fourth-largest in the state. Pawtucket borders Providence and East Providence to the south, Central Falls and Lincoln to the north, and North Providence to the west; to its east-northeast, the city borders the Massachusetts municipalities of Seekonk and Attleboro.

Pawtucket was an early and important center of textile manufacturing; the city is home to Slater Mill, a historic textile mill recognized as the birthplace of the Industrial Revolution in the United States.

The name "Pawtucket" comes from the Algonquian word for "river fall."

The Pawtucket region was said to have been one of the most populous places in New England prior to the arrival of European settlers. Native Americans would gather here to take advantage of the salmon and smaller fish which gathered at the falls. The first European settler here was Joseph Jenckes, who came to the region from Lynn, Massachusetts. He purchased about 60 acres near Pawtucket Falls in 1671. He established a sawmill and forge. These, along with the entire town, were later destroyed during King Philip's War.

Other settlers followed Jencks, and by 1775 the area was home to manufacturers of muskets, linseed oil, potash, and ship building. Also around this time Oziel Wilkinson and his family set up an iron forge making anchors, nails, screws, farm implements, and even canons.

In 1874, the land west of the river was taken from North Providence and added to the (now Rhode Island) town of Pawtucket, and in 1885-1886 West and East Pawtucket were merged and the city was incorporated.

Pawtucket was an early and important center of cotton textiles during the American Industrial Revolution. Slater Mill, built in 1793 by Samuel Slater on the Blackstone River falls in downtown Pawtucket, was the first fully mechanized cotton-spinning mill in America. Slater Mill is known for developing a commercially successful production process not reliant on earlier horse-drawn processes developed in America. Slater constructed and operated machines for producing yarn. Other manufacturers continued, transforming Pawtucket into a center for textiles, iron working, and other products.

By the 1920s, Pawtucket was a prosperous mill town. The city boasted over a half-dozen movie theatres, two dozen hotels, and an impressive collection of fine commercial and residential architecture. Perhaps the most impressive public building in Pawtucket was the Leroy Theatre, an ornate movie palace that was called "Pawtucket's Million Dollar Theater". Many wealthy mill owners such as Darius Goff built their mansions in the area.

The textile business in New England declined during the Great Depression with many manufacturers closing or moving their facilities South where operations and labor were cheaper. Later in the 20th Century, Pawtucket lost much of its architectural heritage to the wrecking ball, including the Leroy Theatre.

But unlike numerous older mill towns in the region, Pawtucket retained much of its industrial base. Today, goods produced in the city include lace, non-woven and elastic woven materials, jewelry, silverware, metals, and textiles. Hasbro, one of the world's largest manufacturers of toys and games, is headquartered in Pawtucket. 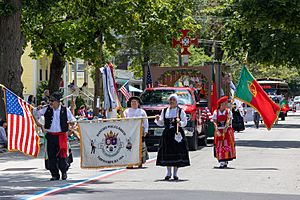 According to the 2000 census, 20.6% of Pawtucket residents are French or French-Canadian. Like nearby cities Providence, Fall River, and New Bedford., Pawtucket hosts a significant population from across the former Portuguese Empire (11.6%), including a significant Cape Verdean population.

Pawtucket is also one of the few areas of the United States with a significant Liberian population, mostly refugees from Charles Taylor's regime; Rhode Island has the highest per capita Liberian population in the country. Pawtucket has a high concentration of West Africans. 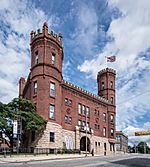 The City of Pawtucket has been supportive of the Arts Community since 1975, and over the past 40 years various organizations have been active in continuing that support of the local arts community and beyond. 2015 marks the 40th anniversary of that support and effort.

At one point The City of Pawtucket hired Researcher Ann Galligan, of Northeastern University, to create an arts and cultural plan. Allowing the city to become more proactive in retaining and attracting artists will enable city officials to allocate resources more effectively to meet the needs of Pawtucket's growing artist community. Over the years Pawtucket has become known as a center for arts and culture. The 2008 documentary Pawtucket Rising also chronicled the influx of artists and cultural activities into previously blighted areas of the city. Each September, the city, in conjunction with the "Pawtucket Arts Festival" organization, and a broad group of local community members, produce an annual city wide Arts Festival.

The American-French Genealogical Society was founded in Pawtucket in 1978.

Belper was where Samuel Slater had been apprenticed to Jedediah Strutt, learning the secrets of Richard Arkwright's Water Frame (and is sometimes known in that area as "Slater the traitor").

Hasbro, a Fortune 1000 toy and game making company, is headquartered in Pawtucket.

Many healthcare, retail and insurance companies are headquartered in Pawtucket.

Fox Point Pickles, a pickling company, is headquartered in Pawtucket.

Public education in Pawtucket is directed by the Pawtucket School Department and contains these schools:

The Quality Hill section of Pawtucket is home to St. Raphael Academy. It is a private college preparatory school founded on the basis of St. John the Baptist de la Salle. "Saints" is a small school consisting of roughly 500 students with a student to teacher ratio of about 15:2. The "Saints and Lady Saints" are very successful in sports including baseball, football, basketball, and softball. St. Raphael Academy is a rival of William E. Tolman. The two schools took part in a Thanksgiving Day football game that was played in McCoy Stadium for over 70 years, though game is no longer played. William E. Tolman now competes annually against its fellow Pawtucket public high school Charles E. Shea, rather than against St. Raphael Academy, a private Catholic high school.

Amtrak's Northeast Corridor and the MBTA's Providence/Stoughton Line run through Pawtucket, though there is no stop for either in the city. Train service at the Pawtucket/Central Falls train station terminated in 1959. Recently there have been discussions to have the "T" stop in Pawtucket at the old train station (which would be substantially refurbished) or at a platform elsewhere on the line. Federal funding has been provided for preliminary planning of a MBTA station in the city, with a request for proposals expected in early 2011. Commuters can board MBTA trains at the South Attleboro stop, off Newport Avenue just over the state line. The MBTA operates a layover facility in Pawtucket for trains on the Providence/Stoughton Line where the trains are kept overnight. The closest Amtrak station to Pawtucket is Providence Station.

Public bus transportation is available in the city. RIPTA operates a hub in downtown Pawtucket with routes to various parts of the city and to parts of nearby towns. Riders can also access RIPTA buses to Providence at the downtown hub on the Smithfield Avenue (#53) and Beverage Hill (#78) routes; as well as on either the R-Line (Broad-North Main) Rapid Service route or #1 (Hope/Eddy) Key Corridor route. The # 1 (Hope/Eddy) Key Corridor route provides service from the Downtown Pawtucket hub north to the MBTA Station at South Attleboro, Mass. and south to T.F. Green Airport in Warwick. At Kennedy Plaza, Providence's hub, riders can access routes to most parts of the state.

Interstate 95 and U.S. 1 also traverse the western part of Pawtucket. Some of the slowest posted speeds on I-95 are in the city due to the "S-curves" near downtown. To preserve certain buildings in the city, planners snaked I-95, creating sharp bends in the highway. 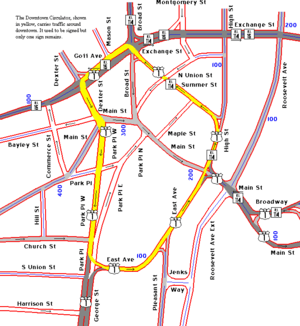 Pawtucket's Downtown Circulator was a one-way loop through downtown; it is similar to British concepts of ring roads. A similar concept was also tried in Providence.

The circulator used East Avenue, High Street, Summer Street, Goff Avenue, Dexter Street and Park Place West. Each half of the Circulator carried one direction of U.S. 1; sections also carried westbound RI 15 and northbound RI 114. It was signed with a big "C" on overhead signs.

There are no longer signs for the circulator, though the road configuration remains. Providence's Downtown Ring Roads have suffered a similar fate.

All content from Kiddle encyclopedia articles (including the article images and facts) can be freely used under Attribution-ShareAlike license, unless stated otherwise. Cite this article:
Pawtucket, Rhode Island Facts for Kids. Kiddle Encyclopedia.