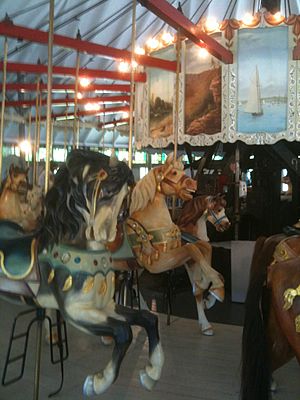 Slater Park is the oldest and largest public park in Pawtucket, Rhode Island. The park is named after Samuel Slater, a famous American industrialist who constructed America's first water-powered textile mill in Pawtucket. The park lies on the banks of the beautiful Ten Mile River and features the 1685 Daggett House, the oldest house in Pawtucket. The park was added to the National Register of Historic Places in 1976. It also features an original Looff Carousel.

Covering 197 acres (0.80 km2), the majority of the land (formerly known as the Daggett farm) was purchased by the city in 1894. The land of the original Daggett farm bore little resemblance to the park that exists today. The Providence Journal described the original tract as "...part swamp and part remains of a wornout farm... In its primitive state less than one-quarter of this area was open to the public. The rest was either densely wooded or so swampy that it was impossible to penetrate anywhere without sinking deep into the mud." Initial development of the park did not begin until 1907 when major improvements were made to this situation. All the swamp growth was removed in the process of turning the low-lying areas into ponds. The heavy underbrush on higher ground was also cleared out, while the established pines and maples were carefully preserved. At the same time, hundreds of oak and pine saplings were set out in selected areas, and grass was coaxed to grow once more on the abandoned fields. The result of these programs is a park which today displays a nearly even balance between grassy fields and open woods.

In 1894, the only roadway on the Daggett farm ran in a straight line from Armistice Boulevard (then Brook Street) to the Daggett House. A major project in the first years of park development was the building of a network of winding drives which opened most of the park to the driving public. At the same time, a system of paths was begun, with emphasis on walks along the river bank, the shores of the ponds, and out across a pair of bridges to the island in the Ten Mile River.

Between 1909 and 1917, several buildings were also erected within the park. This early development was largely directed by three men: the City Engineer, George Carpenter; the president of the Park Commission, James C. Potter; and the first Park Superintendent, George Saunders.

Notable features of the Park

In addition to the Daggett House and Looff Carousel, the park contains other buildings and features:

All content from Kiddle encyclopedia articles (including the article images and facts) can be freely used under Attribution-ShareAlike license, unless stated otherwise. Cite this article:
Slater Park Facts for Kids. Kiddle Encyclopedia.