Central Falls is a city in Providence County, Rhode Island, United States. The population was 19,376 at the 2010 census. With an area of only 1.29 square miles (3.3 km2), it is the smallest and most densely populated city in the smallest state, and the 27th most densely populated incorporated place in the United States. It is also one of only four incorporated places in New England that have a higher population density than the city of Boston (ranking fourth, behind the Massachusetts cities of Somerville, Chelsea and Cambridge, all inner suburbs of Boston). The city takes its name from a waterfall on the Blackstone River.

In May 2010, Central Falls went into receivership, then filed for bankruptcy August 1, 2011.

Prior to the arrival of Europeans the area was home to Nipmuc, Wampanoag and Narragansett peoples. 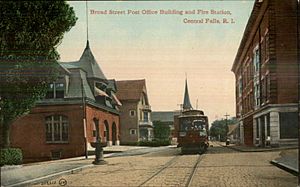 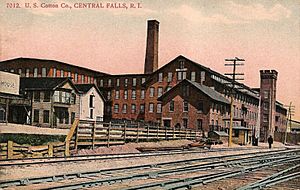 Central Falls has historic significance as being the site of a major battle during King Philip's War. It was here on March 26, 1676 that Narragansett Indians ambushed Captain Michael Pierce and his Plymouth Colony troops who (with 20 Wampanoag Christian Indians) were pursuing them. Nearly all those ambushed were killed. A stone memorial marks the mass grave at the site known as "Nine Men's Misery".

In the 18th century, Captain Stephen Jenks built a trip hammer and blacksmith shop along the Blackstone River, forming the nucleus of what would eventually become Central Falls. Other manufacturers, including a chocolate maker, set up shop in the building and the new village became known as Chocolateville.

While Quakers made up the majority of the first European settlers in the area, they were soon followed by a diverse mix of immigrants from Ireland, Scotland and French Canada. By the 20th century, Central Falls had experienced its own population explosion and for a while was the most densely populated city in the United States. In recent decades, a large number of Hispanic immigrants have found a home in Central Falls. Central Falls has always been an extremely diverse city, so much so that when the city celebrated its 100th anniversary with a parade in 1995, more than 100 countries were represented.

There were 6,696 households out of which 38.9% had children under the age of 18 living with them, 36.4% were married couples living together, 21.6% had a female householder with no husband present, and 34.9% were non-families. 29.3% of all households were made up of individuals and 12.7% had someone living alone who was 65 years of age or older. The average household size was 2.74 and the average family size was 3.38.

All content from Kiddle encyclopedia articles (including the article images and facts) can be freely used under Attribution-ShareAlike license, unless stated otherwise. Cite this article:
Central Falls, Rhode Island Facts for Kids. Kiddle Encyclopedia.