No Child Left Behind Act facts for kids 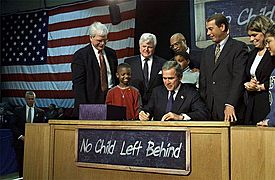 The No Child Left Behind Act is a United States law that was to help students meet higher standards. This law started during President George W. Bush's time in the White House. President Bush made the law official on January 8, 2002. Schools around the US now have to test their students. If they don't, the schools risk losing funds given to them by the federal government. Some parts of this rule include bilingualism standards. All students must be on at least a proficient level (B+) by the 2013-14 school year.

All content from Kiddle encyclopedia articles (including the article images and facts) can be freely used under Attribution-ShareAlike license, unless stated otherwise. Cite this article:
No Child Left Behind Act Facts for Kids. Kiddle Encyclopedia.