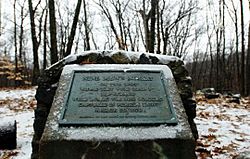 The site of Nine Men's Misery in Cumberland

Nine Men's Misery is a site in current day Cumberland, Rhode Island, where nine colonists were tortured by the Narragansett Indian tribe during King Philip's War. A stone memorial was constructed in 1676 which is believed to be the oldest veterans memorial in the United States.

On March 26, 1676, during King Philip's War, Captain Michael Pierce led approximately 60 Plymouth Colony troops and 20 Wampanoag Indians in pursuit of Narragansetts who had burned several Rhode Island towns and attacked Plymouth. Pierce's troops caught up with the Narragansett, Wampanoag, Nashaway, Nipmuck, and Podunk fighters, but were ambushed in what is now Central Falls, Rhode Island. Pierce's troops fought the Narragansetts for several hours but were surrounded by a larger force. The battle was one of the biggest defeats of colonial troops during King Philip's War, with nearly all killed, including Captain Pierce and the Wampanoags (exact numbers vary by account). The Narragansetts lost only a handful of warriors.

Ten of the colonists were taken prisoner. Nine of these men were killed by the Narragansetts at a site in Cumberland, Rhode Island, currently on the Cumberland Monastery and Library property, along with a tenth man who survived. The nine dead colonists were buried by English soldiers who found their bodies and created a pile of stones to memorialize the men. This pile is believed to be the oldest veterans' memorial in the United States, and a cairn of stones has continuously marked the site since 1676.

Pierce's Fight was followed by the burning of Providence three days later, and then the capture and execution of Canonchet, the chief sachem of the Narragansetts. The war was winding down even at the time that Pierce's party was destroyed, and King Philip himself was killed in August.

All content from Kiddle encyclopedia articles (including the article images and facts) can be freely used under Attribution-ShareAlike license, unless stated otherwise. Cite this article:
Nine Men's Misery Facts for Kids. Kiddle Encyclopedia.