Belper is a town and civil parish in the local government district of Amber Valley in Derbyshire, England, located about 7 miles (11 km) north of Derby on the River Derwent. As well as Belper itself, the parish also includes the village of Milford and the hamlets of Bargate, Blackbrook and Makeney. As of the 2011 Census, the parish had a population of 21,823. Originally a centre for the nail-making industry since Medieval times, Belper expanded during the early Industrial Revolution to become one of the first mill towns with the establishment of several textile mills; as such, it forms part of the Derwent Valley Mills World Heritage Site.

At the time of the Norman occupation, Belper was part of the land centred on Duffield held by the family of Henry de Ferrers. The Domesday Survey records a manor of "Bradley" which is thought to have stood in an area of town now known as the Coppice. At that time it was probably within the Forest of East Derbyshire which covered the whole of the county east of the Derwent. It was possibly appropriated by William de Ferrers, 4th Earl of Derby at some time after it was disafforested in 1225 and became part of Duffield Frith.

The town's name is thought to be a corruption of Beaurepaire – meaning beautiful retreat – the name given to a hunting lodge, the first record of which being in a charter of 1231. This would have been the property of Edmund Crouchback, 1st Earl of Lancaster who died in 1296, the record of his estate mentioning "a capital mansion". The chapel built at that time still exists. Originally consecrated in 1250 as the Chapel of St Thomas, it was rededicated to St John during the reign of King Henry VIII. St John's Chapel is still in use today and is thought to be the oldest building still standing in Belper. 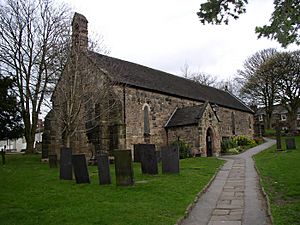 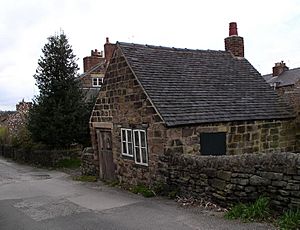 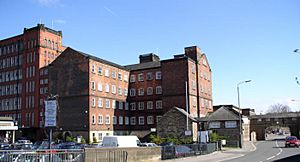 Strutt's North Mill built in 1803, to replace the original one destroyed by fire 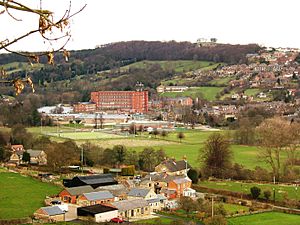 The coal deposits of Derbyshire are frequently associated with ironstone within the clay substrate. Initially obtained from surface workings, it would later have been mined in shallow bell pits. It is thought that this was important for the de Ferrers family, who were ironmasters in Normandy. By the reign of Henry VIII Belper had grown to a substantial size. It is recorded that in 1609 fifty-one people died of plague. However, in a Parliamentary Commissioners' report of 1650 regarding Duffield and its chapelries, Belper is described as "a hamlet appertaining to Duffield".

From at least the 13th century there were forges in the Belper and Duffield areas and iron-working became a major source of income, particularly nail making. By the end of the 18th century there were around 500 workshops in the town supplying nails to the newly built textile mills. The workshops were eventually superseded by machinery during the 19th century. Some of the nail-makers' houses are still in existence and form part of local tours of the town.

The industrialist Jedediah Strutt, a partner of Richard Arkwright, built a water-powered cotton mill in Belper in the late 18th century: the second in the world at the time. With the expansion of the textile industry Belper became one of the first mill towns. In 1784 Strutt built the North Mill and, across the road, the West Mill. In 1803 the North Mill was burnt down and replaced by a new structure designed to be fireproof. Further extensions followed, culminating in the East Mill in 1913 – a present-day Belper landmark. Although no longer used to manufacture textiles the mill still derives electricity from the river, using turbine-driven generators.

Strutt had previously patented his "Derby Rib" for stockings, and the plentiful supply of cotton encouraged the trade of framework knitting which had been carried on in the town and surrounding villages since the middle of the previous century. Mechanisation arrived about 1850, but by that time the fashion for stockings for men was disappearing. However elaborately patterned stockings, for ladies especially, were coming into vogue, and the output of the Belper "cheveners" was much in demand.

The construction of the North Midland Railway in 1840 brought further prosperity. Belper was the first place in the UK to get gas lighting, at a works erected by the Strutts at Milford. Demand was such that in 1850, the Belper Gas and Coke Company was formed, with a works in the present Goods Road. Electricity followed in 1922 from the Derby and Nottingham Electrical Power Company's works at Spondon. The first telephones came in 1895 from the National Telephone Company. The end of the century also brought the motor car, CH218, owned by Mr. James Bakewell of the Elms being possibly the first.

Belper remained a textile and hosiery centre into the 20th century. Meanwhile, other companies were developing: iron founding led to Park Foundry becoming a leader in the solid-fuel central-heating market; Adshead and Ratcliffe had developed Arbolite putty for iron-framed windows; Dalton and Company, which had been producing lubricating oils, developed ways of recovering used engine oil proving useful during the Second World War. In 1938, A. B. Williamson had developed a substance for conditioning silk stockings; the introduction of nylon stockings after the Second World War seemed to make it redundant, but mechanics and fitters had discovered its usefulness in cleaning hands and it is still marketed by Deb Group as Swarfega. 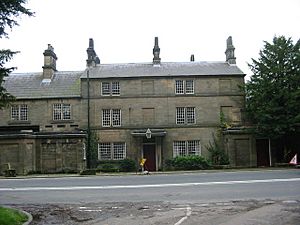 As well as Belper itself, the civil parish also includes the village of Milford and the hamlets of Bargate, Blackbrook and Makeney.

The hamlet of Blackbrook is located 2 miles (3 km) west of Belper on the A517 Ashbourne road.

The A6 is the major through-road of the town and runs parallel to the River Derwent to the west.

Belper railway station is situated on the Midland Main Line. Regular trains between Derby and Matlock on the Derwent Valley Line are almost the only services to stop there, although one main line service per weekday stops each way and the Friends of the Derwent Valley are campaigning for more.

The town is served by regular bus services to Derby and surrounding towns and villages as well as longer routes to Manchester and London. The major operator is Trent Barton who operate the bus garage on Bridge Street.

The oldest church still used for its original purpose is the Belper Unitarian Church, built in 1788. The present Methodist church was opened on 28 June 1807 and was originally built to hold 1,400 worshippers.

St Peter's Church, a prominent landmark in the town, was built in 1824 to replace the smaller 13th century St John's Chapel which is now used as a town council and heritage chamber. A second Anglican church, Christ Church, was built in 1850. A local saying calls St Peter's "the low church in the high place" and Christ Church "the high church in the low place" based on their different liturgical traditions.

The town is also home to a Baptist, a spiritualist, a Roman Catholic and a further Methodist church at Openwoodgate, as well as Belper Community Church which meets at Whitemoor Day Centre twice a month.

Belper Town F.C. play their home games at Christchurch Meadow and are currently in the Northern Premier League Division One South. They are nicknamed the Nailers as a reference to the historical nail manufacturing industry in the town.

In 2009, members from two of the town's poetry groups completed a poetry trail in memory of local poet Beth Fender, who died in 2002. Beth's Poetry Trail consists of 20 poems situated in a variety of locations in the town, such as outside Belper Library. Poems by Emily Dickinson, Philip Larkin and Spike Milligan are included on the trail, as well as Beth's own poetry.

In 2014, Belper was presented with the High Street of the Year award for the Market Town category, as well as winning the award overall. The judges stated "Belper is blessed with a wonderful history as a World Heritage Site but has much to offer as a thriving market town as well. The judges felt that this outstanding application demonstrates how much more can be done to transform an outwardly successful town centre into a go-to destination for locals and visitors alike." Belper won against towns and high streets such as Brighton, Colwyn Bay and many other places.

Belper Singers are an experienced chamber choir of some 25 voices, who sing both sacred and secular works. They give about five performances a year, including singing in various cathedrals.

Belper is twinned with Pawtucket, Rhode Island after Samuel Slater – an apprentice of Jedediah Strutt – went there and founded the American cotton spinning industry.

Belper made international news in 2001 after rejecting a gift of a large fibreglass Mr. Potato Head model from Pawtucket, as some residents considered it "hideous". The statue was refurbished and returned in 2015, though opinion is still divided.

All content from Kiddle encyclopedia articles (including the article images and facts) can be freely used under Attribution-ShareAlike license, unless stated otherwise. Cite this article:
Belper Facts for Kids. Kiddle Encyclopedia.