The Seekonk River is a tidal extension of the Providence River in the U.S. state of Rhode Island. It flows approximately 8 km (5 mi). Most historical scholars agree that the name is derived from two Native American words, sucki (meaning black) and honc (meaning goose). The river is home to the Brown University men's rowing team, India Point Park, Blackstone Park, Crook Point Bascule Bridge, Narragansett Boat Club (the oldest rowing club in the country), Swan Point Cemetery, and the Bucklin Point waste-water treatment facility. The River is listed by RIDEM as an impaired waterway.

The river begins where the Blackstone River reaches sea level below Pawtucket Falls. From there it flows due south between Providence and East Providence, picks up flow from the Ten Mile River, and eventually flows into the Providence River between Bold Point and India Point. The Seekonk River is the northernmost point of Narragansett Bay tidewater.

The Seekonk River is home to numerous fauna that either migrate to the bay at some point during the year or live there year-round. There are several species of fish, shellfish and crab that have been documented. Birds include Loon, Cormorants, Herons, Gulls, Terns, Swans and Geese.

Numerous flora also make the Seekonk River their home both on land and underwater. Common aquatic vegetation includes grasses like spartina grass and phragmites in most high marsh areas and brown and green seaweed in the intertidal zone. Other vegetation that makes its home along the river include shrubs like rosa rugosa, various trees like the willow, oak and beech. 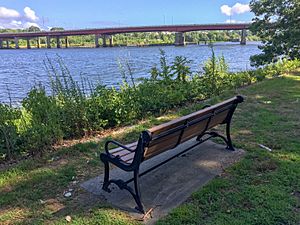 Looking out at the Henderson Bridge from Blackstone Park

Below is a list of all crossings over the Seekonk River. The list starts at the headwaters and goes downstream.

All content from Kiddle encyclopedia articles (including the article images and facts) can be freely used under Attribution-ShareAlike license, unless stated otherwise. Cite this article:
Seekonk River Facts for Kids. Kiddle Encyclopedia.