The Crook Point Bascule Bridge (or the Seekonk River Drawbridge) is a defunct Scherzer rolling lift railway bridge which spans the Seekonk River, connecting the city of Providence, Rhode Island, to the city of East Providence. Stuck in the open position since its abandonment in 1976, it is known to nearby residents as the "Stuck-Up Bridge" and has become somewhat of a local icon of urban decay. 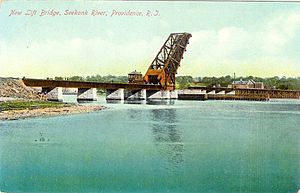 Postcard view of the then-new bridge

Part of the East Side Railroad Tunnel project, the Crook Point Bascule Bridge was built in 1908 to provide a direct connection to the old Union Station along the New York, New Haven and Hartford Railroad line. It was designed by Scherzer Rolling Lift Bridge Company of Chicago and measures 850 feet (260 m) across, raises to a 64 degree angle, and opens a clear waterway 125 feet (38 m) wide. When railroad usage declined in the 1970s and plans were made to demolish Union Station, the East Side Railroad Tunnel and the Seekonk River Drawbridge were subsequently abandoned in 1976 with the bridge fixed in its current open position to allow river transit. 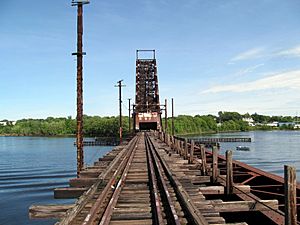 View across the bridge in 2017

In 2003, Brown graduate Robert Manchester proposed a $30-million plan calling for the development of Crook Point, which includes the eastern landing of the bridge. Featured in his proposal were plans to reopen the bridge and tunnel as a light rail system, bringing commuters from East Providence to Thayer Street and downtown Providence.

In May 2006, Mayor David Cicilline organized Transit 2020, an advisory group determined to find alternative transit solutions for Providence in order to overcome some limitations of RIPTA, on which it depends heavily. Included in Transit 2020's first report was an analysis describing the East Side Railroad Tunnel and Seekonk River Bridge line as a potential corridor for a light rail or bus rapid transit system.

All content from Kiddle encyclopedia articles (including the article images and facts) can be freely used under Attribution-ShareAlike license, unless stated otherwise. Cite this article:
Crook Point Bascule Bridge Facts for Kids. Kiddle Encyclopedia.