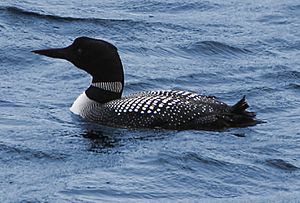 A loon is a bird that lives on water. It is like a duck. Loons are the size of a large duck or a small goose. Loons can be hard to find because they are shy around people. The name "loon" is from the Scandinavian word for "clumsy". Loons are the state bird of Minnesota. Loons are found in most parts of North America and Eastern Europe. They enjoy cool climates in the summer and migrate to ocean coasts in the winter.

Loons can dive up to 200 feet underwater for food. Their bodies are shaped for diving. To dive better, they have solid bones (most birds' bones are hollow) and feet placed far back for swimming under the water.

There are five North American loon species. They have black (or grey)-and-white heads, pale breasts, and striped back feathers.

Loons can lay up to two eggs. They are brownish in color which helps them blend into their surroundings. Both the male and female parent take turns sitting on the eggs. After hatching, they fly south when the weather gets cool. The young loons spend three years in the south before returning to the north.

They are best known for their loud, trumpeting call. They also make melodic, wailing or laughing sounds. Loons communicate to each other through their sounds. They also communicate with humans and other animals through dance. Loons warn others to stay away from their nests by dancing on the water. Loons are protective parents and will dance to exhaustion and death to protect their eggs. Raccoons, gulls, and skunks have been known to devour loon eggs.

Loons eat fish like sunfish, perch, and bullheads. Loons do not chew their food. They have elastic throats that allow the loon to swallow their food whole. When they swallow fish, their throat expands to the size of the fish they eat so they do not choke.

Scientists band, or tag loons to try to understand more about them.

All content from Kiddle encyclopedia articles (including the article images and facts) can be freely used under Attribution-ShareAlike license, unless stated otherwise. Cite this article:
Loon Facts for Kids. Kiddle Encyclopedia.