Rehoboth is a historic town in Bristol County, Massachusetts, United States. Established in 1643, Rehoboth is one of the oldest towns in Massachusetts. The population was 11,608 at the 2010 census. Rehoboth is a mostly rural, suburban community with many historic sites including 53 historic cemeteries. 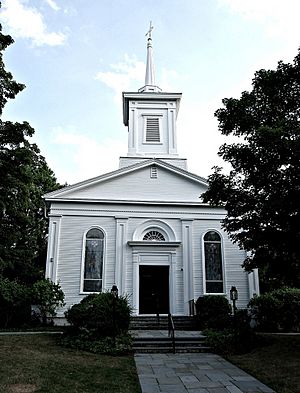 Rehoboth was established in 1643, originally by Walter Palmer (born 1585) and William Sabin, it was incorporated in 1645, one of the earliest Massachusetts towns to incorporate. The town is named for the Hebrew word for "enlargement," (Broad Places) signifying the space settlers enjoyed.(God has given us room)

Early Rehoboth, known as "Old Rehoboth," included all of what is now Seekonk, Massachusetts, and East Providence, Rhode Island, as well as parts of the nearby communities of Attleboro, North Attleborough, Swansea and Somerset in Massachusetts, and Barrington, Bristol, Warren, Pawtucket, Cumberland, and Woonsocket in Rhode Island. The town was and still is a site of a crossroads which help to serve Taunton, Providence, Fall River and points to the north.

One of the founding fathers of Rehoboth was Samuel Newman, a clergyman from Weymouth, Massachusetts who moved to the Seconet area near to Little Compton in the Plymouth Colony. Samuel Newman and his followers migrated north and established a huge town common in what is now Rumford, Rhode Island. They gave the roundabout a distinctive name: "The Ring of the Green." Newman Congregational Church (founded 1643, current building dates to 1810) still stands at the intersections of Pawtucket Ave, Newman Ave and Ferris Ave. The area was known as Rehoboth village. Somewhat of a celebrity, Newman's famous bible concordance (the third ever printed in English) had just been published in London. He spent the next few years revising the concordance with a second edition published in 1650 that includes on the title page, "By Samuel Newman, now teacher of the Church at Rehoboth in New England." According to legend, he worked on the revisions by burning pine knots instead of candles. The concordance, later called the Cambridge Concordance, was reprinted as late as 1889, almost 250 years after it was first published by the founder of Rehoboth. 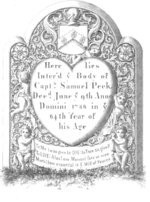 The Rehoboth Carpenter family was one of the founding families. Among the earliest purchasers of the land that is now Rehoboth and nearby communities was the Peck family, who came from nearby Hingham, Massachusetts, initially. Joseph Peck, the brother of the Rev. Robert Peck, the disaffected Puritan who had fled his Hingham church in England, after the crackdown by Archbishop Laud, had purchased sizable tracts of lands from the Native Americans. Peck's son was fined fifty shillings for making advances toward the maid. Peck died in Rehoboth in 1697. These tracts of land Peck willed to his son Samuel, who served as Deputy to the General Court at Plymouth, as well as the first representative from the town of Rehoboth after the Plymouth Colony and Massachusetts were united. The family continued to live in the area through the twentieth century. Today's Pecks Corner in Rehoboth is named for this early Puritan family. 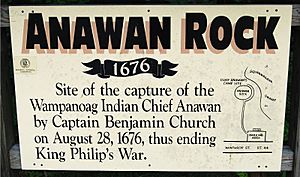 Rehoboth was a significant site during King Philip's War. On June 30, 1675, King Philip led a small force in a surprise attack against the undefended settlement, killing settlers, burning houses, and causing residents to live in constant fear of attack.

On March 28, 1676 Canonchet led the Narragansetts in a second attack, destroying 42 homes, 21 barns, corn mills and a sawmill.

On August 28, 1676 Captain Benjamin Church surrounded and captured Anawan, a Wampanoag sachem who had become chief upon the death of King Philip two weeks earlier. The Wampanoags had taken a position above Squannakonk Swamp to hide from the colonists. Church's capture and execution of Anawan effectively ended the campaigns in southeastern Massachusetts of King Philip's War. Anawan Rock, a large puddingstone, still marks the location. Although a desolate place at the time, the rock is not far off modern-day Route 44.

Rehoboth claims to be the birthplace of public education in North America. Upon incorporation, members of the Rehoboth community and Newman Church (now in present-day East Providence, RI) elected to collect funds to pay a teacher for the settlement's children. Church and government were closely tied in early colonial villages, so the word 'public' refers instead to access to education by all children in the community, not just those of wealthy parents. Another town landmark is related to education: The historic Hornbine School, built in 1845, is located in the southeast corner of town and is open to the public for visiting and educational purposes from May to September.

For the town's 350th anniversary in 1992, the town conducted a promotional "take back" of the communities that were once the original Rehoboth. With encouragement from musket-bearing members of the 13th Continental Regiment, Rehoboth Minutemen, other towns and cities ceremonially 'returned' their land for the duration of the anniversary year celebration. 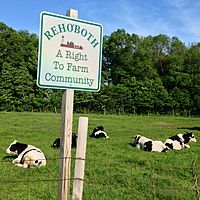 Rehoboth is a Right to Farm community

Rehoboth shares its entire western border with Seekonk. It is also bordered by Attleboro and Norton to the north, Taunton and Dighton to the east, and Swansea to the south and southeast. Rehoboth's localities are Four Corners, Hornbine, Kingmans Corner, North Rehoboth, Pecks Corner, Perrys Corner, Perryville, Rehoboth Village, South Rehoboth and Anawan Rock. The town is located 11 miles (18 km) east of Providence, Rhode Island and 50 miles (80 km) south of Boston.

There were 3,523 households out of which 37.8% had children under the age of 18 living with them, 70.8% were married couples living together, 7.4% had a female householder with no husband present, and 18.5% were non-families. 14.1% of all households were made up of individuals and 5.0% had someone living alone who was 65 years of age or older. The average household size was 2.89 and the average family size was 3.20.

The Carpenter Museum hosts several annual events including the Folk Art & Artisans Show in November and many other events held throughout the year. In 2013, the museum was awarded the Gold Star Award by the Massachusetts Cultural Council for their 2012 multi-event cultural program, "Remembering Rehoboth School Days." The antiquarian society hosts a yearly Clam Bake each summer, a traditional that began in 1884, behind Goff Memorial Hall.

The Blanding Library hosts events and programs for children and adults throughout the year. The Blanding Book Club meets monthly. A group for needleworkers (knitting, crochet, etc.) meets twice a month at the library. Programs are offered for children, from pre-schoolers up, including reading, arts/crafts, summer programs, performances, visiting exhibits and other special events.

Each month Poetry in the Village hosts an open microphone night and featured guest at the Blanding LIbrary in Goff Memorial Hall. This group is independent from the library. The public is invited to participate.

Many cultural events held in Rehoboth are supported in part by grants from the Rehoboth Cultural Council, an affiliate of the Massachusetts Cultural Council. Members of the council, although appointed by town selectmen, operate independently from town government and award grants on a yearly basis with funds allotted by the state organization. Several non-profit organizations based in Rehoboth provide resources or cultural events.

For those interested in history, the 13th Continental Regiment Rehoboth Minute Company, originally chartered in 1774, was recommissioned in 1992 as part of the town's 350 anniversary celebration. It was incorporated three years later as a non-profit, educational organization. The present recreated group portrays the original 1774 unit in civilian dress, accoutrements and firearms. Men, women and children participate in the unit as musketmen, drummers, fifers and assorted characters. The well-known group of re-enactors are invited to participate in parades, ceremonies, encampments, and battle re-enactments, as well as visiting schools throughout the region.

Each September, the town events committee hosts the Annual 'Larry Procopio' Harvest Block Party, a free event held on the Redway Plain field off Route 44. The event was named after the late Larry Procopio, an active member of the community who first organized the yearly event.

The town's historic one-room school house, the Hornbine School, is open spring and summer for visits and tours. The school, operated from 1848 to 1937, was restored in 1969 and now belongs to the town under the jurisdiction of the historical commission, and tended carefully by the non-profit Horbine School Association.

Rehoboth individuals and families who find themselves in need are assisted by Rehoboth Helping Hands, a non-profit organization that provides year-round assistance (508-252-3263). Under the direction of retired Rehoboth police officer Steve Martin, Helping Hands operates the town's food panty, fuel assistance program, and holiday giving programs. Confidential services are offered to any resident in need. The food pantry is supplemented by the Rehoboth Community Garden during the summer and fall.

All content from Kiddle encyclopedia articles (including the article images and facts) can be freely used under Attribution-ShareAlike license, unless stated otherwise. Cite this article:
Rehoboth, Massachusetts Facts for Kids. Kiddle Encyclopedia.